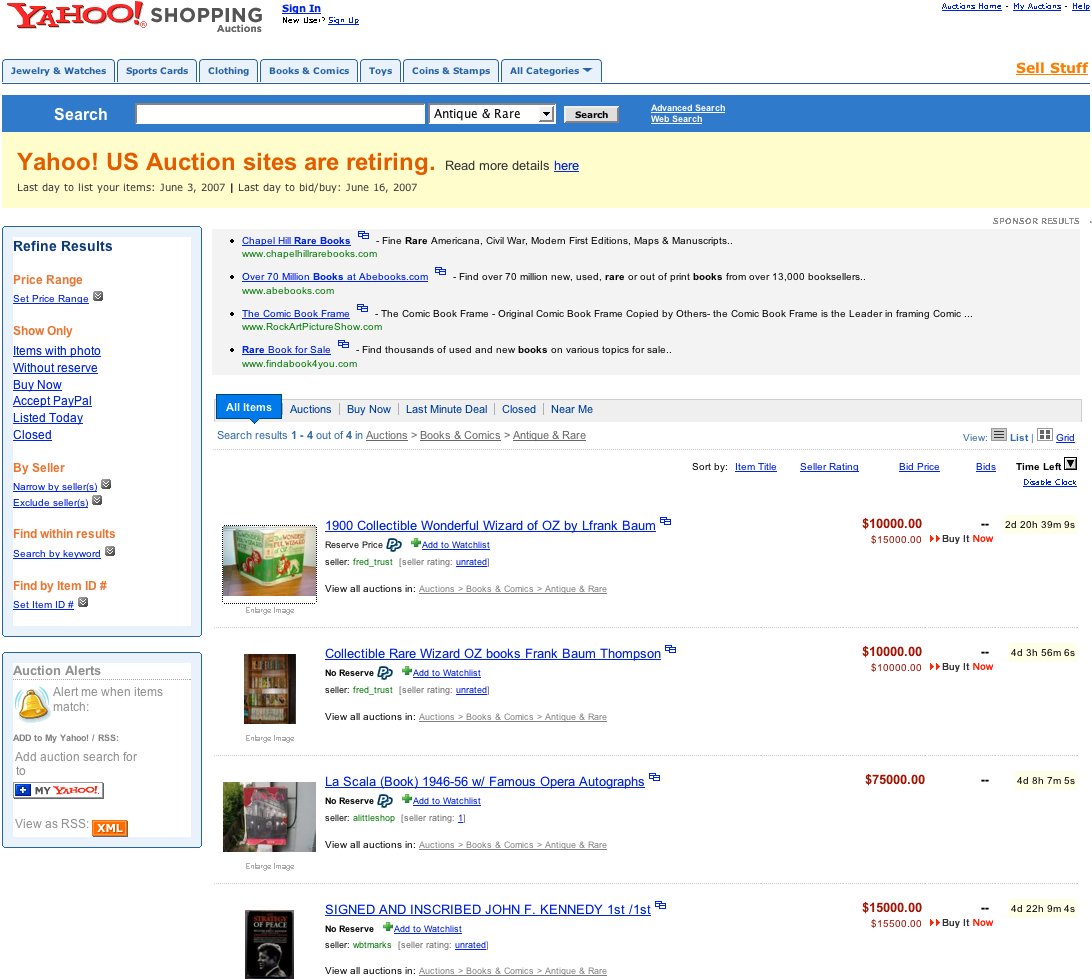 The auction arm of the world's most visited website (according to Alexa rankings), Yahoo, is closing down. That would seem to be astonishing news. Online auctions appear to have become an enormous force in the field. As best we can tell, there are always far more books being offered for sale online than at all traditional auctions combined. The closing of the online auction of the most visited site on the web would seem to be a momentous event. The world yawned.

As you are undoubtedly aware, though Yahoo may be the most popular website, it is not the most popular auction site. It is undoubtedly in the top ten, and from what we can tell, probably the top five. It might even be top two. It doesn't matter. In this competition, there is only one site that matters, and as we all know, it is eBay. Now, even Yahoo recognizes that fact. According to Reuters, citing tracking firm comScore, eBay controls some 94% of the auction market. Yahoo obviously was not making inroads.

From looking at their listings, books may have actually been one of Yahoo auction's stronger suits. At the time of their announcement in early May, they were showing almost 90,000 listings for books, though half of these were comics. This compares to over 450,000 for eBay. Perhaps more tellingly, Yahoo had 1,882 listings for "antique and rare" books, compared to 62,462 for "antiquarian and collectible" books on eBay. A small start-up site might be happy with that ratio, but it is a sign of defeat for so major a force as Yahoo. They recognized it was time to throw in the towel. To gather listings, you need sales, and to achieve sales, you need listings. Yahoo was not able to break in to this chicken and egg scenario at either end.

There are still a few other auctions trying to compete with the eLephant of online auctions. uBid is perhaps the oldest and most notable other online auction, though "notable" is a relative term here. However, books appear a low priority for this auction. They do not have a books category, other than as a sublisting under "collectibles." I found only 12 items here, not a one of which appeared collectible to me (I fear the Uzi modification manual offered is intended for practical use, not collecting). For those who buy and sell books, Amazon is likely the most significant other site. They do have an auction section, and a search under "books" found 20,894 listings (about a third of what Yahoo located). However, some of these have no discernable relation to books I can find, such as the $150 worth of repair service on your computer's motherboard that showed up as a "book." If there is a way of finding just antiquarian or collectible books at Amazon's auctions, the means are not clear, but I think it can safely be noted that rare books are not Amazon's strength in the first place.