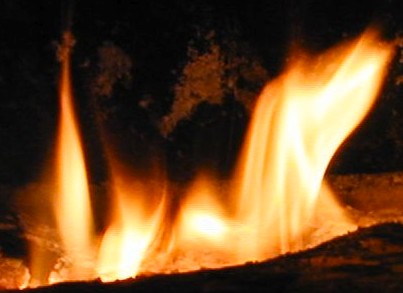 Books and fire traditionally had a more ominous connection.

There was a book burning in Kansas City Sunday, May 27, 2007, but it was not in protest of their content, as is usually the case. No extreme fundamentalist preachers or fringe politicians were involved. These books were burned by Tom Wayne, owner of Prospero's Books, a used book store in Kansas City. Wayne's target was the lack of reading by people today. People get their information from the internet and television instead of reading books. Wayne chose a dramatic way to let his displeasure be known.

Prospero's Books has some 20,000 books in its warehouse, and was running out of space. They range from best sellers from a few years back to obscure older titles that don't draw much interest. Wayne reportedly tried to give them away to libraries and thrift shops but found no takers. Finally, he resorted to his fiery protest to the lack of interest in books today. Midway through the protest, the fire was put out by Kansas City firefighters. Wayne did not have a permit. However, he plans to get a permit next time and continue with monthly book burnings until all of the excess stock is removed.

While the sentiments about reading expressed are certainly noble, booksellers will recognize that there is a deeper issue here that they are constantly battling. There are millions of books out there that no one wants at any price, even free. Many of them jam booksellers' warehouses, even if not all sellers are perceptive enough to recognize their lack of worth. Lots of them can be found on listing sites such as Abebooks, offered for a buck or two (or sometimes for a lot more by listers who believe age or obscurity alone makes a book valuable). Eventually, the inventory becomes too large to store, or worse yet, the seller finds it is time to get out of the book business and is confronted with what to do with all of this stuff. No one who loves books, or whose livelihood depends on them, wants to face the ultimate conclusion, that they are worthless. No one ever wants to make that final decision, to destroy a book. Sadly, it is a choice that one day most booksellers will probably have to face. Many do already, albeit in a less dramatic fashion than Wayne. They cart them off to the dump, where they are buried with old television sets and computers. Many in the public are unaware of this sad reality, and probably would be appalled by it, but that's just the way it is when there are millions of books nobody wants.