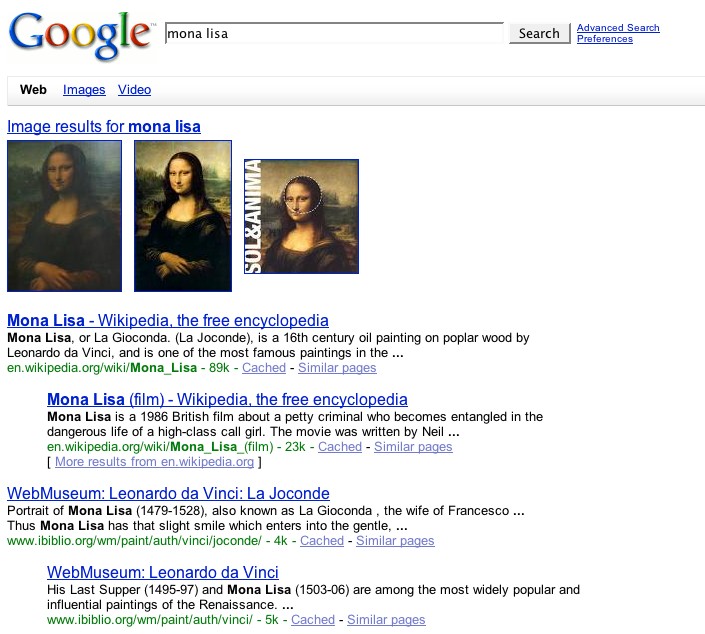 Now when you search Google for &quot;Mona Lisa,&quot; you actually find her picture.

Google took a quantum leap forward in its search listings this past month, though it was a stealth leap. One look at Google's very simple search page, virtually unchanged in a decade, makes clear that Google is determined to maintain an image of consistency, even as its world spins forward at a dizzying pace. Nevertheless, the old Google search you have known for years has been replaced by something called "universal search," even if you didn't immediately notice the difference.

What has changed is that Google has integrated several of its separate searches into the main search. So now when you do an internet search on Google, it will also list matches from their videos, images, maps, news, and books. If you didn't think you were getting enough matches before, there will be many more now. Of course many searches were already bringing in millions of matches, and if you try to make your way to the end, you will find that after maybe a thousand, Google won't show you any more anyway. Quantity was never much of an issue. What universal search adds are matches that may (or may not) be more in line with what you want.

For example, if you search for "Mona Lisa," you will now find, at the top of the listings, pictures from Google Images. Prior to May 15, you would not have found these unless you searched Google Images separately. You would only have seen text. A little further down the results, you will find matches from YouTube. Who would have thought YouTube would be ranked with the Louvre website in searches for "Mona Lisa?" Actually, YouTube ranks higher! Our culture is rapidly changing.

You can still search images or videos separately to better target your results. What's odd is that you can't search websites for standard matches alone such as Google previously provided. It's either a niche or all. For most searchers, this is probably a plus, although some may prefer not to have these other types of listings mixed in.

Book collectors can compare the changes to one that has happened in many collections. Think of the old Google search as a collection of books; books, that is, and nothing else. The new Google search is more like a collection that is focused on books, but also includes broadsides, manuscripts, photographs and other forms of ephemera. It is more, though traditionalists may not wish to broaden their horizons. Certainly it adds greatly to the convenience of those who wish to find everything, as what was half a dozen searches are now combined into one.