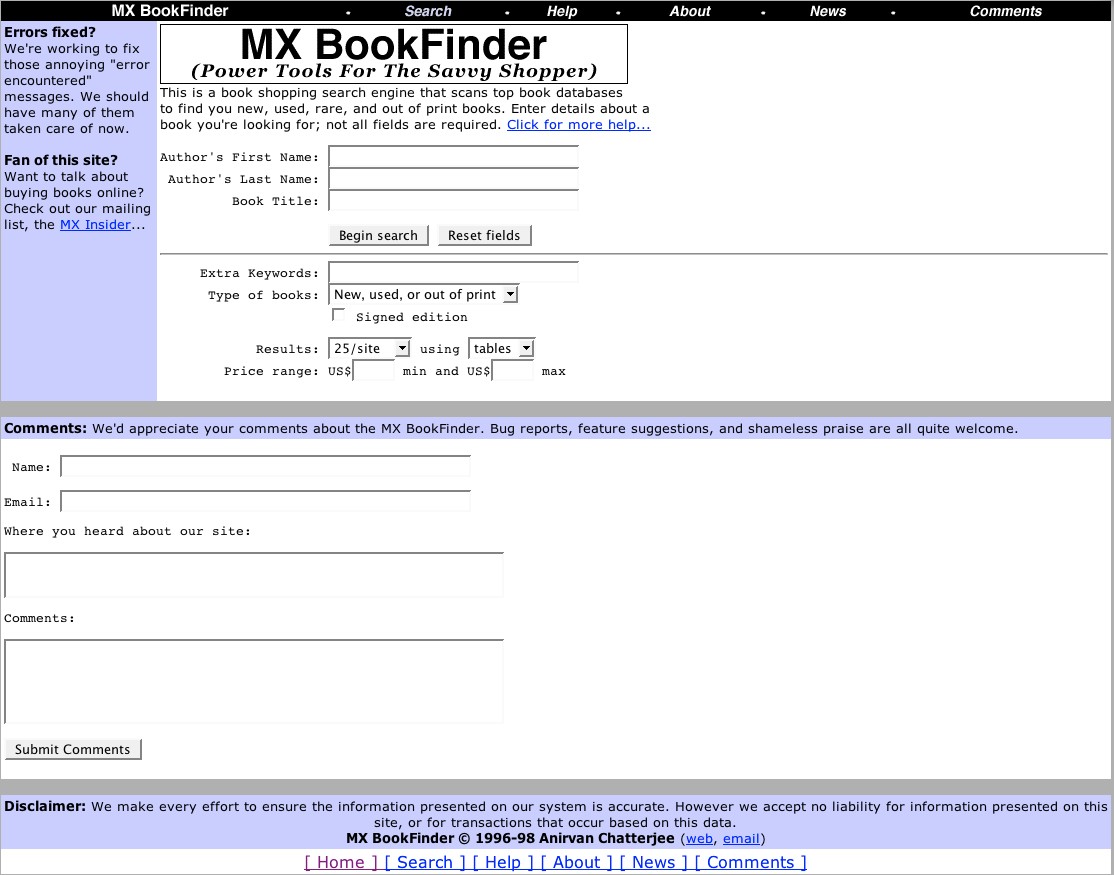 BookFinder celebrated a major milestone in longevity last month -- its 10th anniversary. Reaching ten years of age may not sound like much of a milestone to those in the antiquarian book trade, but BookFinder is an internet site, not a book. That was an eternity ago, the age of the dinosaurs (also called "dial-up modems"). According to some old numbers we found, only about 20% of the U.S. population, and 1.5% of the world's had internet access at the time. Today, there are more people on MySpace and YouTube at this very moment than had access to the internet in 1997 (okay, I made up that statistic).

In 1997, the top sites were those that connected your telephone line to the web, ones like AOL, Compuserve and Prodigy. When you wanted to find something, you went to Alta Vista or Infoseek or Excite because no one had ever heard of Google. You still got your browser from Netscape. Microsoft had not yet crushed them. eBay was still known as "Auction Web." File sharing was not an issue since Napster was still a couple of years into the future. So was the internet bubble. Investors had not yet even made the money on internet stocks they would lose when the bubble burst.

It was into this new young universe, still unknown to most of the world, that BookFinder was launched. Anirvan Chatterjee, a 19-year-old Berkeley student, with help from high school friend Charlie Hsu, took the site live on January 30, 1997. Theirs would search multiple bookselling sites, enabling users to find listings all in one place. The only shortcoming was that in those early days, there weren't a lot of bookselling sites to search. However, they did find five, including Amazon, Abebooks (known as "The Advanced Book Exchange" at the time) and Powell's Books. The others are forgotten, but among the earliest participants were Interloc (now Alibris), Bibliocity (merged with Alibris), Antiqbook, BookAvenue and YourBooks. BookFinder searched an inventory of 5 million books then (compared to 125 million today).

Actually, Abe and Alibris weren't the only book sites to undergo name changes. BookFinder itself was known as MX BookFinder when it first went live. Within a year or two it was decided to drop the apparently meaningless "MX" from the name. However, if you type www.mxbookfinder.com or www.mxbf.com into your browser, they will still take you to the BookFinder website.

If you expect sentimentality and reminiscing from BookFinder on this momentous occasion, you will be disappointed. This is a site created by computer wizardry, wonks or geeks or whatever, displaying as much corporate emotion over the milestone as would Mr. Spock. This site is all about technical expertise and function, not hugs and congratulations. When the announcement hit our mailbox, the heading was "Long Tail Book Search Engine Turns 10." Not only is that about as unemotional as it gets, we didn't even understand what it means. We immediately shot back "what is a ‘long tail' search engine?" They provided an explanation and a few links, and we think we more or less get the idea. It is an interesting concept that describes much of what is happening now in terms of internet commerce.