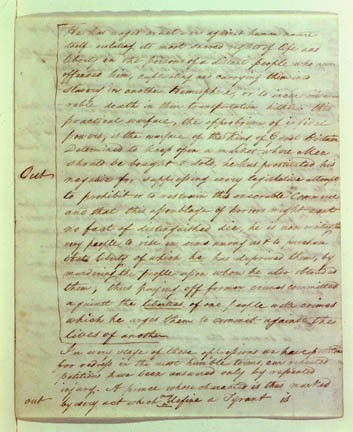 Draft of the Declaration of Independence reviewed by Richard Henry Lee, with notes in Lee's hand, [ca. 1794].


One other thing to note is that there used to be books on display throughout the house. Now, all books will be kept in the Rosenbachs’ library, which is on the third floor.

…In the…library was a mammoth Spanish gilt bookcase, constructed in such fashion as to make the books almost invisible and only partly accessible. This really suited the Doctor, for he was able to secrete in its dark vastness books he purloined from stock without Philip’s ever being able to find them. Here was shelved the distinguished A.S.W. Rosenbach collection of Americana, the impressive row of thin sixteenth and seventeenth century English tracts on the colonial settlements, the Bradford imprints, the rarities from Franklin’s press, the volume of Virginia pamphlets that Washington owned, and the surprisingly rich group of works describing the expansion of the frontier of the Pacific, a significant number of them in superb, original condition, obtained long before the book-collecting world placed the present-day premium on Western Americana.
---Rosenbach, p.246.

AT: Are these books available to be handled by the public?

MB: Not all of them. It really depends upon their condition. Some of them are really fragile and/or really rare, and we try to minimize handling of those sorts of materials.

Having said that, it is important to note that scholars can and do look at many of our materials close up. We pride ourselves on the amount of access to the collection that we offer. Unlike some other institutions, you don’t need a letter of reference or a scholarly c.v. to use our collection. Researchers simply need to call and make an appointment.

One major reason that we adapted this policy is that access was an extremely important concept to the Rosenbach brothers. Our collection is used by all sorts of visitors – high school students, seniors, affiliated and amateur scholars, collectors. We don’t differentiate.

AT: Any other programming initiatives you’d like to talk about more at this point?