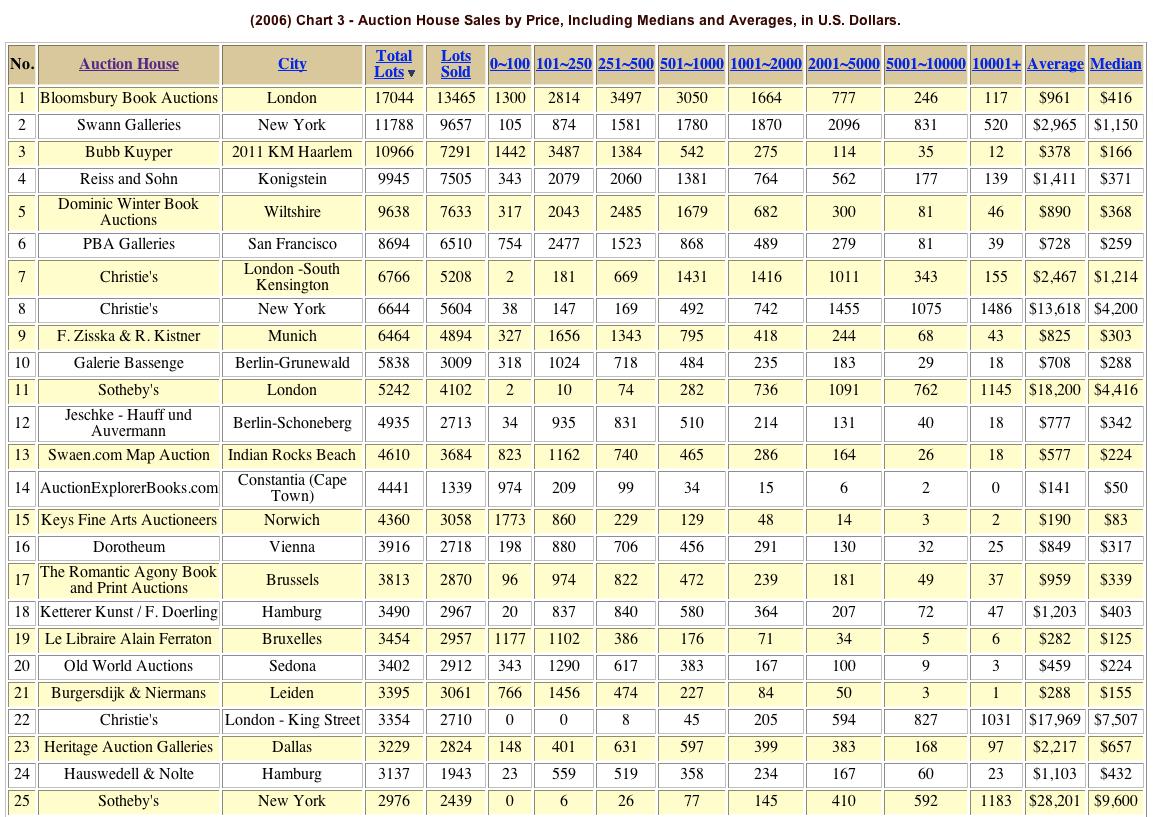 One of the many charts now available on AE provides detailed pricing information by auction house.

The value of rare and collectible books inched up ever so slightly last year, auction records compiled by the Americana Exchange have revealed. The median price for books and related ephemera at auction rose from $420 to $423 last year. While the good news for sellers and those who own collections is that prices managed to go up, the bad news is they rose more slowly than inflation. The rise in the AEI (Americana Exchange Index) was but 0.7%. The rise in the CPI (Consumer Price Index) was 2.5%.

These results reflect pricing at the mid to higher end of the book spectrum. Inexpensive books are rarely sold at auction. Therefore these results do not necessarily carry over to the lower end of the book market. The ever-increasing number of low to mid priced books offered through online selling sites and eBay may well have placed added pressure on prices at this end of the market. Auction sales only show trends for mid to upper level books. However, it is possible that increased competition at the mid levels where books sold online and at auction intersect has had an impact on sales at auction. While there were occasional aberrant years, the dominant trend throughout the twentieth century was for the price of collectible books to grow at several times the rate of the CPI. Book prices trailing the CPI, as they have the past two years, is unusual.

The average price for books sold at auction was $2,557 for 2006, a drop of almost $200. However, this is not considered to reflect trends in pricing as accurately as median prices since averages can readily be skewed by the number of very valuable items coming up for sale in any given year. Average prices often swing wildly from year to year while median prices move at more gradual, consistent rates.

Sell through at auction also inched up from the prior year in 2006. For the past year, 75% of the book lots offered for sale were purchased, vs. 74% in 2005. Lots sold for more than the high estimate also increased. In 2006, 49% sold above the high estimate vs. 28% below the low estimate. For 2005, the ratio was 48%-29%. However, these numbers can be somewhat misleading since they are based only on lots sold, and many auction houses simply won't sell lots that fall too far below minimum estimates. When lots that did not sell are combined with those sold below the minimum estimate, we find 45% of the lots offered failed to bring the minimum estimate, while 37% brought in more than the maximum estimate.