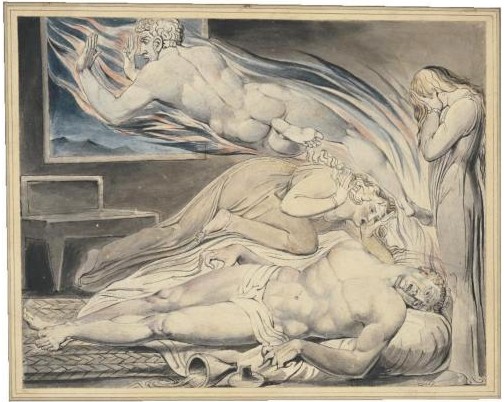 Death of the Strong Wicked Man, highest ranked of many Blake plates. Courtesy of Sotheby's.

The time has arrived for the third annual listing of the AE Top 10 plus 490 (also known as the AE Top 500) results from book and related ephemera auctions for 2006. The past year proved the market remains healthy for books at the upper end, with seven items qualifying for millionaire status. At the top, we find an old and familiar name, and while nothing quite matched the high for 2005, $5.6 million for an Audubon Birds of America folio, 2006 did provide the second straight year with a $5 million book. A link to the complete AE 500 can be found after the Top 10 list. There is also an explanation of what type of material qualifies for this list at the end of the article.

First we start with a few items from the Top 500 that did not make the Top 10. In 1948, Albert Einstein answered in this signed manuscript as to whether scientists are morally responsible for the atomic bomb. "No," he responded. "The responsibility lies however with those who make use of the means, not with those who have brought these advances to light; therefore with the politicians, not with the scientists." #330. $83,904.

In 1779, George Washington wrote to George Clinton, "The state of the army in particular is alarming on several accounts, that of its numbers is not among the least." This list of problems his army faced seemed insurmountable at the time, but of course, Washington did prevail. #251. $102,000.

A first edition of Charles Lutwidge Dodgson's (also known as "Lewis Carroll") Through the Looking-Glass would be a valuable book in any instance, but in 2006 the dedication copy he presented to the real "Alice," Alice Pleasance Liddell, was sold at auction. #242. $105,984. The first French edition of the original Alice book dedicated to "Alice" also was sold. #200. $121,440.

A signed letter from President-elect Abraham Lincoln to Pennsylvania Governor Andrew Curtin also hit the market. Lincoln suggests the Governor make it clear that Pennsylvania will maintain the Union "at all hazards." #188. $131,450.

A most interesting item is A Catalogue of the Different Specimens of Cloth Collected in the Three Voyages of Captain Cook to the Southern Hemisphere. This book contains 39 actual pieces of cloth collected on Captain Cook's three voyages. #158. $144,000.

A most remarkable letter from Catherine of Aragon, the first of Henry VIII's six wives, went on the block. Henry overruled the Catholic Church and set up the Church of England, all so he could divorce her. That he did, and by the time Catherine wrote this letter to her nephew, Holy Roman Emperor Charles V in 1534, she had been exiled to a low-rent castle. She still called herself queen, but Henry now applied that appellation to Anne Boleyn. #144. $156,000.