Would You Like Fries With That? -- Amazon Sells Groceries 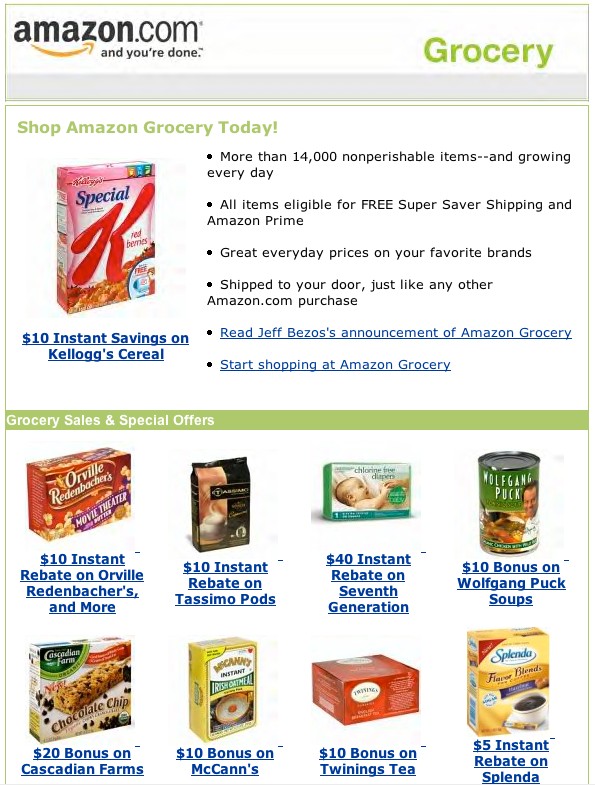 In an email, Amazon informs us they are now selling groceries.

Amazon.com, the world's best-known bookselling site, recently expanded its offerings with the announcement that they would now be selling groceries online. In a letter from Amazon CEO Jeff Bezos published on their site, he noted that during the test phase, people have been "ordering everything from Kashi cereal to Jiffy Pop popcorn." Maybe, but a click to their grocery store brought up a page featuring Special K cereal and Orville Redenbacher's popcorn. That hardly scratches the surface. There are at least six brands of tuna, five more of anchovies, ten of mustard, six of pepper, fourteen of salt (who needs fourteen brands of salt?), eight potato chips, nine of diapers (did you know there is a diaper brand called "Tushies?"), five of macaroni and cheese, and four of batteries. In all, Amazon tells us they have 14,000 nonperishable food and household items.

Jeff tells us, "My kids are thrilled to have Annie's Mac & Cheese delivered right to our door." I wouldn't be. That stuff must have a million calories and enough fat to reconstitute a whale. "As if it weren't already a staple of their diet," he notes, "yesterday they asked if they could have some for breakfast." I think my daughter has asked that too. Another reason not to buy groceries from Amazon.

I'm old enough to remember when Amazon was a bookselling site. Seems like ages ago. I guess there isn't anything they don't sell today. Their home page is a cacophony of changing items, as it tries to remember who I am, and what I want right now, versus ten seconds from now, when it will give me a different set of choices. Were it not for its reputation, I doubt I would have any idea that this is a bookselling site. Obviously this works for Amazon, and their rollout of groceries after a trial run means that they will probably sell lots of them as well. They clearly are not book people, but they are astute businessmen. I may prefer the old Amazon, but I certainly can understand why they would go where the dollars lead them. After all, how many booksellers would refuse to carry mac and cheese if their customers wanted to buy it from them?

So I got to Amazon's home page after reading Jeff Bezos' letter, and do you know what they have waiting for me? Seriously. They must remember that my interest is in books, and my daughter mac and cheese, because there waiting for me is a copy of Macaroni And Cheese, a book by Marlena Spieler. I can now eat and read about mac and cheese at the same time. But I personally cannot stand the stuff, so why would I want to do either?