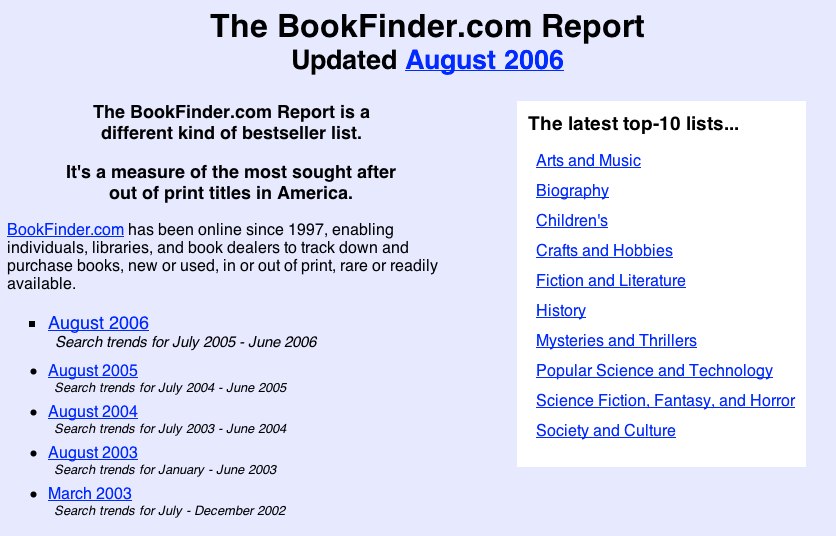 BookFinder issues its annual report of the most sought after old books.

Actually, BookFinder has given us ten top ten lists, something it would take David Letterman two weeks to accomplish. They are broken down by subject. Heading up the top ten biographies is a biography that was recently a movie. That, along with the great admiration the man has earned, makes the Man in Black, a biography of Johnny Cash, number one. Number two, however, surprises me: Forty-Seven Years in the Universalist Ministry by Daniel Bragg Clayton. I don't know the book, but it's a surprising subject for such success. Other subjects of top ten biographies include Charlie Russell (western artist), Marilyn (last name not necessary), and a Mafia hit man. Number 8 is My 60 Memorable Games by Bobby Fischer, the chess genius and repulsive human who talks like Mel Gibson drunk when he's sober.

Most of the most sought after books change from year to year, bur riding atop the Arts and Music category for the fifth straight year is...are you ready for this?...Sex by Madonna. I doubt that this has much to do with either art or music, and probably not a lot to do with sex either, but Madonna is Madonna, which is better than having the top art book be something by Paris Hilton.

The top ten children's books are essentially a mystery to me, which says it's been awhile since my children were children. No Dr. Seuss, no Goodnight Moon, no Beatrix Potter (or Harry, for that matter), and thankfully none of those insipid Berenstain Bears which for reasons known only to the Almighty were popular when my kids were young. Something called The Lion's Paw by Robb White is number 1.

Under Crafts and Hobbies (which includes cooking) numbers 1, 2 and 5 are about knitting. Do people still knit? Knitting is more popular than cooking? Is this the top 10 of 2006 or 1906? Number 7, How America Eats, sounds like a more logical number 1 than The Principles of Knitting.

Number 1 in Fiction and Literature is Sisters, the handiwork of second lady Lynne Cheney. At least she is straightforward enough to label her words fiction, unlike her husband. The other side of the political spectrum is represented by Gore Vidal, while Nora Roberts is but one of two authors to manage two entries in the top ten. Of course, she has written so many novels she has an unfair advantage.