A Great Literary Hoax from England! 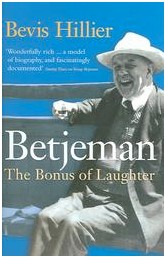 We don't make a habit of writing about British literary intrigues, but once in awhile we have to make exceptions. This one made headlines in the land of Shakespeare, but perhaps most people on the western side of the Atlantic missed it. This is the story of a most savage, yet hilarious hoax played by one British literary critic upon another. Never say the English lack a sense of humor.

The subject was Sir John Betjeman, a British poet, architectural writer, and even broadcaster. Betjeman played no personal role in the hoax, he having died in 1984, but Betjeman was said to have a great sense of humor, so he probably would have enjoyed this story. Well, at least he probably would have enjoyed the story were he not its unwilling subject.

This is really the story of two critics and writers, biographers of Betjeman, and bitter rivals. One is A.N. Wilson, perhaps the better known, a prolific writer, and, evidently, a biting wit. Wilson has not exactly been above using personal insults in his criticism, and one of his victims is rival writer and Betjeman biographer Bevis Hillier. Perhaps, in a simile Americans will better understand, Wilson played the role of Butthead to Bevis Hillier.

Apparently the dagger that set off this hoax was comments Wilson made about the second of three volumes of Hillier's biography of Betjeman released in 2002. Wilson called it a "hopeless mishmash." In England, those are fighting words. Actually, Wilson has also said some even more unkind words about Hillier along the way, and the fact that Wilson, a competitor, was writing such a critical review of his work, must have struck Bevis as a pretty buttheaded thing for his rival to do. Considering that Wilson was in the process of writing his own biography of Betjeman, one can see the potential for a conflict of interest here.

So one day this letter shows up in Wilson's mailbox. It was sent by one Eve de Harben in France. Her father supposedly had once possessed a letter written by Betjeman to Honor Tracy, the father's cousin. Tracy was a long time friend of Betjeman, but the letter revealed she had been more than just a friend. Betjeman's letter gushes with love and sexual references. Betjeman was not exactly a prude, but this letter shined a bit more light on his sexual proclivities. Without doing much checking on the authenticity of the letter, Wilson published it in his Betjeman biography as an example of the poet's personal predilections.