What's Up and Coming with West Coast Bookstores? 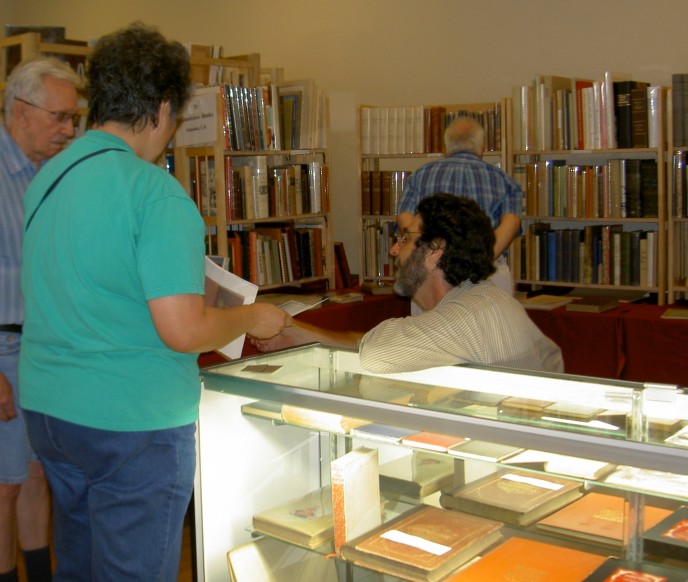 I bopped on down to the Sacramento Antiquarian Book Fair from my high-on-the-hill shop in Virginia City, Nevada, a mere 2-1/2 hour drive. It was held September 16th at the Scottish Rite Temple and Bruce McKinney will tell you all about it. In fact, I finally had the pleasure of meeting and talking to our esteemed (but retired) leader for the first time. I have been a contributor to AE Monthly for a couple of years now, but we had only met in emails. Bruce and I discussed the book business for quite a while, but he was busily doing surveys so we parted company and I headed for the main showroom and the forty plus delicious book stands that awaited me there. I had been assigned to do an article not on the fair, but on bookselling and its future according to a random selection of booksellers who were at the Fair. The question I started with was "How long have you been in the book business and how old were you when you started?" and I went on from there, more or less.

I began by talking to Steve Blackmer from Chanticleer Books in Sonoma. I have known Steve for some years and have stopped in his store several times or run into him at PBA auctions. Steve began in the book business in 1982 working in someone else's store. Then in 1984, he opened his own store. He has always sold really high quality, general, used books and has recently begun to do more scholarly and collectible books.

My second query was "What percentage of your sales are you doing on the Internet?" Steve said about 50% of his sales are online. He does do his pricing with research online, but finds that he is particular enough about what he buys that he doesn't run into what I call the "16 cent syndrome" which is where one buys a really good book in near new condition for $2.00 at a thrift store or garage sale and then finds it for 16 cents on Albiris or ABE. I asked Steve if he buys online. "Yes," he said, "but not a lot."

My next question was what he felt about the future of bookselling; brick and mortar stores, internet, or book shows? He thought about it for a minute; "All of the above, but there will probably be more online, less brick and mortar. Not just because of the internet, but because rents are getting so high that it's harder to justify a store. Fewer people are coming into stores and just about everyone makes use of the internet so they don't have to go in a store. There is a rather steady decline in the bookstore business."