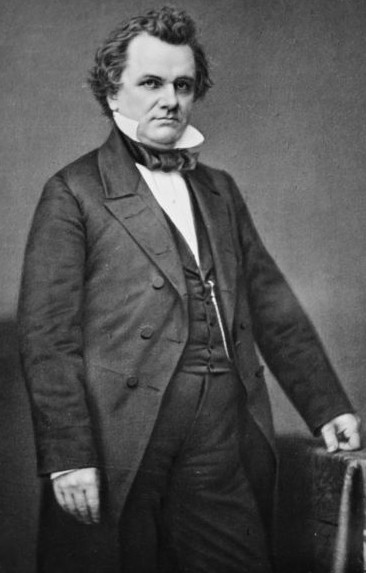 
However, something very different and unexpected happened. Rather than working toward its gradual elimination, southern leaders dug in their heels. Where once southern leaders were people like Washington and Jefferson, slaveholders who nonetheless saw the injustice in the institution, half a century later the penultimate southern leader was John C. Calhoun. Calhoun was no Washington. The Southern leadership came to defend slavery as some kind of moral good, God's will, better for the slaves, who were inferior beings anyway, unworthy of human rights. Rather than a necessary evil, slavery had come to be regarded as a good, to be preserved forever in the South and spread through the land. Meanwhile, abolitionists forced Northerners to stop looking the other way. They were forced to confront the issue as a moral claim, rather than an economic system. Finally, the Fugitive Slave Acts and the Dred Scott Decision not only forced Northerners to face the issue, it actually required them to take part in enforcing slavery. This, I believe, was fast becoming an untenable situation, one which would have in time required the South to at least begin on a road to emancipation. Living "half slave, half free," I believe, was a temporary solution, not a permanent one.

Would better behavior by politicians, perhaps sufficient to delay the outbreak of war, have led to the South finding its own way to emancipation? I doubt it. Post-war history suggests otherwise. The century of Jim Crow, lynching, segregation, discrimination, poll taxes and literacy tests, schoolhouse door stands and church bombings, implies not. It took a century to bring civil rights to the south, and even that only came through force. I doubt that the changes necessary to eliminate slavery would have come soon enough on their own to prevent a violent confrontation North vs. South no matter how politicians had behaved. There really is no midpoint when it comes to freedom. Compromise was only a delay, not a solution, and delay is only successful if there is an agreeable compromise on the horizon. There was none.

That said, Holt's arguments about politicians dividing the country for their own benefit is still a critically important observation for America today. Today's "wedge" issues are far less clear moral demands on such large segments of the population than slavery. Issues like flag burning, the Pledge of Allegiance, and the like cause divisions, but not ones many Americans are prepared to go to war over. Nonetheless, politicians are adept at using these for political gain, even where they have little practical impact. We may not go to war over these politically created issues, but we become divided, and as a divided nation, we are weaker at fending off threats from others. Politicians may not lead us into another Civil War, but they may make us weaker in an era when we need to be strong to survive. Holt's message could do more to save us today than it could have in the times about which he wrote.