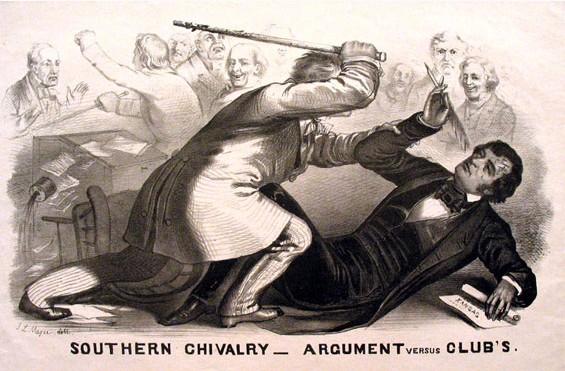 
Next came Stephen Douglas' Kansas-Nebraska Act, which allowed for popular sovereignty in territories previously barred from having slavery by the 1820 Missouri Compromise. Bleeding Kansas, which resulted from Kansas-Nebraska, where northern and southern sympathizers battled for control, became one of the most immediate causes of the war. Once Lincoln was elected, the southern states proceeded to secede, not because the new president wanted to terminate slavery in their own states, but because he was adamantly opposed to its extension to new territories. Holt is right on concerning this point.

However, the author goes one more step where I have difficulty following along. He lays much of the blame on politicians. Politicians then, like politicians today, had no problem dividing the nation's people when they saw it as benefiting themselves. Us against them is a wonderful tool for getting votes. Retaliation for political slights is human nature. Holt saw these as motivating factors in politicians' behavior during the two decades leading up to war, and it is hard to argue the point. The question is whether more attempts to resolve the differences, rather than make political hay out of them, could have prevented the Civil War. My own suspicion is that the divide was so great, the importance of these principles so crucial, that better behavior by politicians could have done no more than put off the inevitable a bit longer.

Holt makes his case as early as the annexation of Texas. Newly elected Democratic President James Polk unexpectedly upholds his predecessor's policies toward Texas, to the chagrin of many in his own party. It opens the door for a larger than expected slave state. Polk is interested only in expansion, not slavery, but the result is that political divisions, previously based more on party lines, start to become regional. Northerners seethe under Polk's slight and never forget. A few years later, they gather the strength to respond with the Wilmot Proviso, banning slavery in the territories soon to be taken from Mexico. Southerners angrily respond, and the Proviso, though passing the House does not make it through the Senate. Still, it remains the center of a growing factional dispute.

Holt makes us stop at this point. Politicians are stirring up anger over the issue of expansion, but Holt tells us it is really not an issue at all. He cites politicians on both sides as recognizing this is a non-issue. Maintaining free choice on the issue of slavery, as demanded by the South, is of no real consequence as these territories were not about to choose slavery anyway. Beyond East Texas, the arid climate is not suitable for plantations and slaves, and the land's past history is free, Mexico having outlawed slavery years ago. Huge fights are generated, and resentments developed among the populace, over the issue of extending slavery when everyone knows this will not happen. The battles are all for political show, but the divisions they cause are real.