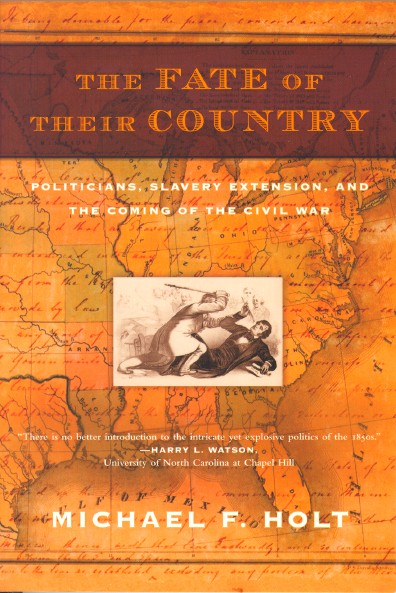 The Fate of Their Country, with image on cover of caning in the Senate of Senator Charles Sumner in 1856.

The Civil War may be the most avidly collected period of American history. The twists and turns of this horrible, internecine conflict remain the subject of discussion and debate long after the last participant departed this Earth. However, some of us find the period before, antebellum America, even more fascinating. This is the period which led to the terrible war which fascinates us to this day. Could it have been prevented, or was war inevitable? That is the question posed by a recent book that I just got around to reading. I am not particularly convinced of its underlying hypothesis, but it is still a most important read, because its theory may have more relevance to what is happening today than it does to 1840s and 1850s America.

The book is The Fate of Their Country, by Michael F. Holt. Holt's thesis follows a track with three stopping points, and I can agree with the first two. The problem starts with slavery. It may be nicer to talk about "states rights," or even differing economic needs. However, the one irresolvable issue was slavery. Everything else was subject to compromise, as it had been with the Nullification crisis of 1832. The North was willing to bend on disputes such as tariffs to avoid war.

However, Holt maintains that it was not slavery per se that was the fatal issue. It was extension of slavery to the new territories. He provides ample evidence of this. No laws were ever passed attempting to abolish slavery in the South, nor was such even advocated, except by ardent abolitionists, a minority even in the North. Holt points out that even Lincoln promised to preserve slavery in the South. Even the Emancipation Proclamation did not outlaw slavery. It only outlawed it in states in rebellion against the Union. It was more a political move to weaken the Confederacy than a statement of principle. After the Civil War, the 13th Amendment outlawed slavery. However, Holt points out that a prior 13th Amendment was passed by both houses of Congress by a two-thirds majority in 1861, just as the southern states were seceding. It provided that no amendment could be passed which would interfere with "domestic institutions" within the states, the institution in mind being the "peculiar" one of slavery. Even Lincoln, in his inaugural address, expressed that he had no objection. It was never adopted as events on the ground made it irrelevant before the amendment could reach the state legislatures for ratification.

While, Holt maintains, slavery itself was not the issue, the expansion of slavery into new territories was. While the North could tolerate slavery where it already existed, it could not accept its expansion. The South, on the other hand, saw an influx of new, non-slave states as diluting its power, and perhaps inevitably one day leading to total abolition. The result was such things as the Wilmot Proviso, that never-passed legislation, hated in the South, which would have prevented the extension of slavery to the territories acquired through the Mexican War. Then there was the Compromise of 1850, which allowed California to enter as a free state in turn for letting other new states in the southwest decide the issue for themselves.