Sex and Videotape at the Library 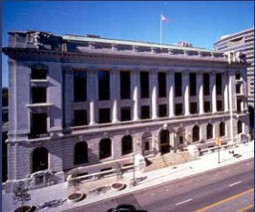 Everyone knows that stories about sex sell, or at least generate more readers, but when you write about antiquarian books, you rarely get opportunities for such easy success. Now, thanks to the good folks of Cleveland, I am finally getting my chance. Thank you, Cleveland.

There's more going on at the library than meets the eye. At least more than used to meet the eye. According to television station WKYC's website, cameras recently installed in the Cleveland library system to catch book theft have been picking up much more goings on. Not everyone who visits the library goes with the intention of filling some traditional function, such as reading, research, or even stealing books. No, not even the hallowed institution of the library is immune from the smut which has seeped into every nook and cranny of society. Not that it necessarily wasn't always so, it's just that we didn't use to have cameras to record it all.

The security chief noted that libraries basically like to leave people alone if they aren't causing a disturbance. I would tend to agree. I'd hate to have librarians hovering over me like car salesmen at an automobile dealership. I'd rather deal with teens making out in the stacks then librarians who act like used car salesmen. Besides which, having sex in the library is essentially a victimless crime, unless you consider the janitor who has to clean up after them a victim. Admittedly, this type of behavior should not go on in front of children, but the kids are all home playing videogames now anyway. They probably wouldn't know what to do in a library, at least not until their old enough to engage in sex.

The purpose in writing this article is not to make moral judgments. As pointed out earlier, it is primarily to increase readership. However, it is also intended to convey one piece of important, nonjudgmental advice. What you do in the library is not as secret and private as it once was, or as you may still think. The rash of book thefts, or slicing of maps and pages from valuable books, has forced librarians to install security cameras. The intention may be to pick up theft, but those cameras are not discriminating. They pick up everything. Whatever you do in there, someone may be watching, and whatever they see, may be captured on film forever, for the whole world to see. What you do may not be illegal, but it sure can be mighty embarrassing. If there is something you don't want your friends, neighbors, or mother to see you doing, don't do it in the library. This, unfortunately, applies to just about any public place now, not just libraries. Big Brother is watching, and he may not punish you, but he sure could humiliate you. Think about that the next time you plan to engage in sex in the library's restroom, or even pick your nose at the library for that matter.