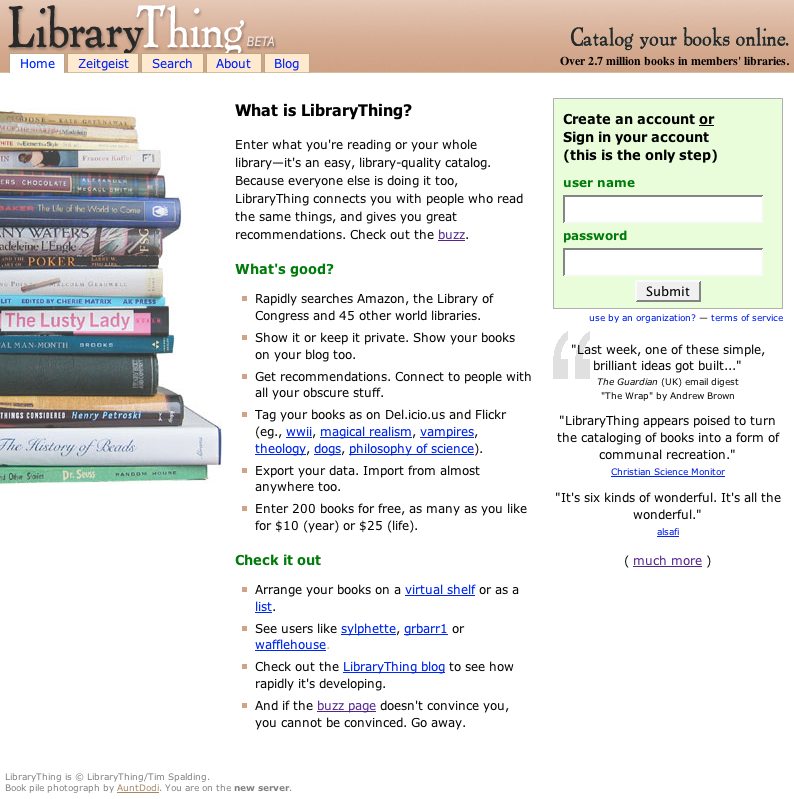 Abebooks recently purchased a stake in LibraryThing.com, following up on its acquisition of BookFinder last fall. In this case, Abe purchased a 40% interest, rather than the entire company. LibraryThing is a site which appeals to bibliophiles, allowing them to post information and converse with others holding similar interests.

LibraryThing was launched less than a year ago, in August of 2005, and already has a reported 35,000 members. Members are able to catalogue their books on the site, write reviews, compile their own profiles, and examine the collections of other bibliophiles with similar tastes. LibraryThing provides software to search the books of other members owning some of the same titles as your own, so you can find other books that appeal to someone with similar interests.

Another feature of LibraryThing is that it provides access to numerous public databases to help members catalogue their books. Those databases include the Library of Congress, Amazon, and roughly 45 others.

Membership in LibraryThing is free, at least for those who catalogue no more than 200 books. Unlimited cataloguing is provided for $10 per year, or $25 for a lifetime. For those with a life expectancy greater than 2 1/2 years, the latter sounds like the better deal. According to Social Security actuarial tables, that includes men under the age of 96 and women under age 99.

While the potential for each site to help the other is obvious, Abe's press release was a bit vague on how this would be implemented. In the release, Abebooks' President Hannes Blum is quoted as saying, "the most exciting part of this deal is the unique information LibraryThing generates about books and book-buying habits. This data will help people find and buy more books on our site." It's not clear exactly how the data will do this, and on his blog, LibraryThing founder and majority owner Tim Spaulding says, "LibraryThing will not suddenly sprout Abe ads all over the place or prevent you from buying from other booksellers. Rather, LibraryThing will provide Abe with certain anonymous and aggregate data, like book recommendations or tag clouds, to help Abe users find books they want." While this statement is somewhat unclear as well, one can't help but think that LibraryThing will at least steer members to the availability of books they might like on Abe. There may not be Abe ads plastered all over the site, and nothing may prevent members from buying elsewhere, but it is hard to see why Abe would make this investment if it didn't help steer some business their way. If so, this is good news for Abe's sellers, for while 35,000 is not an enormous number, it is a significant number, and this must include some of the most active book buyers. It provides a piece to Abe's commitment to invest in promoting the site.

No price was stated, but Spaulding's blog certainly implies that not a lot of cash changed hands. "I want to make it clear I did not just get rich," he writes. "I'm walking away with just enough to cover my legal fees and some new shirts..." Rather, it appears the funds expended by Abe will be used to improve and grow the site. LibraryThing will now be able to hire a couple of full-time employees to develop the site, while gaining access to more stable servers. Additionally, promotion of the LibraryThing on Abe should be enormously beneficial to the latter, as the number of bibliophiles who visit Abe must be many, many times the number who know about LibraryThing. I was not previously aware of the site, and from what I can tell, not many others in the book trade were either. This should provide LibraryThing with a large boost in publicity, while providing Abe's sellers with additional traffic.