Part Four of the Forbes Sale of American Documents Completed 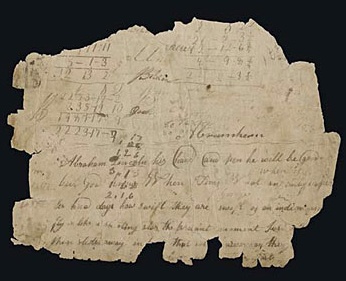 Part Four of the auction of the Forbes Collection of American Historical Documents took place at Christie's in New York on May 19, 2006. Three previous auctions were held from 2002-2005 dispersing much of this magnificent American collection originally put together by Forbes Magazine founder Malcolm Forbes. His son and former presidential candidate "Steve" Forbes has been dispersing those collections, including art and other sales as well as the historical American documents.

The items in the fourth sale were not quite on the level of the earlier ones, and yet this collection was so extraordinary that even at the fourth level, the material was still spectacular. The first sale had seen prices as high as $3 million-plus for an autographed copy of Abraham Lincoln's last speech, given four days before he was assassinated. The top price at the most recent auction was just over $350,000, still a hefty sum for most collectors. It, too, went for a Lincoln item. The Civil War leader's reputation stands as tall today as it did when he led America through its greatest crisis.

Most of the documents offered came from political leaders, and most of those were ones who achieved the nation's highest office. Every president was represented from George Washington to George H.W. Bush (Malcolm Forbes died during the first Bush administration). The auction started with autographed documents from 23 of the signers of the Declaration of Independence, and ended with a most ironic defense of those who joined the National Guard during the Vietnam War by the first President Bush. In 1988, the defense was of his running mate, Dan Quayle, rather than his son. In between, along with presidents, were such names ingrained in the American memory as Lafayette, Noah Webster, Harriet Beecher Stowe, William Tecumseh Sherman, Ralph Waldo Emerson, Henry Adams, Douglas MacArthur, and Ty Cobb. Incomprehensibly thrown in was an autographed and hand-corrected speech by Benito Mussolini only a few months before he fell and was summarily executed (it sold for $4,800).

The highest price went for a ragged leaf from Abraham Lincoln's home-made "sum book," which he used as a schoolboy. It is the oldest surviving Lincoln autograph manuscript. The price was $352,000, slightly over the high estimate. The next highest price went to a most fascinating 1813 letter from the second American President, John Adams, to William Tudor. In it, Adams greatly downplays the roles of George Washington and Benjamin Franklin in the American Revolution, going so far as to say, "...they were as often terrible Embarrassments. They were both not only Superficial but ignorant." Instead, he describes the greatest heroes as fellow Bostonians Sam Adams, John Hancock, and James Otis. Adams was from the cradle of the Revolution, Massachusetts, and evidently didn't think others played as vital a role. However, he concedes that Washington and Franklin are regarded as "the two Great Agents of the American Revolution; the two Guardian Angels," and "will probably be so for all future ages." On this point he was right. Adams' remarkable letter sold for $168,000, against an estimate of $70,000-$100,000.