A Sordid Tale of The Destruction of a Great Collection 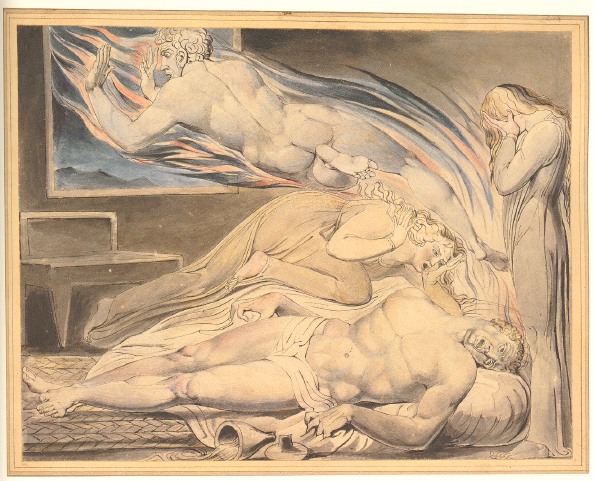 It was a miracle find. Drawings meant for an early 19th century book of poetry, created by a poet-artist-printer himself, lost for almost two centuries show up at an obscure bookshop in the English countryside. Thought at first to be mere prints, further research reveals that these are the original watercolors produced by the artist-poet William Blake. As the excitement mounts, they are offered to a museum, to be kept together for eternity. Then it all unravels. New players, for whom Blake is neither poet nor artist, but a financial opportunity, insert themselves in the deal. The price goes up, the collection is no longer viable as a unit, so it is broken into pieces to pay off the middlemen. Blake's drawings were auctioned off last month, one by one, the collection likely destroyed forever, nothing left but the pieces.

For those in the book trade, this is not one of our prouder moments. What started as a collection of amazing works lost in a family's attic for generations, appeared to be headed for a museum, to be protected for eternity. Along the way, some people in the book and art businesses inserted themselves in the process for easy money. Now, the collection is lost again, but this time forever. It is a sad and shameful day for the book and art trades, for it was our trades that destroyed this wonderful collection.

The story begins almost two centuries ago. William Blake, poet and artist, is commissioned to create illustrations to go with a new printing of The Grave, a poem first published in 1743 by Robert Blair. If you don't know this poem, you don't know Blair, as it was all he wrote. Blake produced twenty watercolor illustrations. Twelve were used in the edition published in 1808, though publisher Robert Cromek brought in Luigi Schiavonetti to create the engravings from Blake's illustrations, apparently an embarrassment to the latter. It also meant Blake made little money on the project. The vultures would make up for that centuries later.

After the work was published, the watercolors remained with Cromek. He died in 1812, and the illustrations passed on to his wife. They next appeared at an auction in Edinburgh in 1836, where they sold for just 1 pound 5 shillings. That's roughly $2 in American currency, or about ten cents each. The buyer is unknown. And then, they were lost. At some point, they came into the possession of the family of artist John Stennard. However, as they were passed down from generation to generation, their significance, like the drawings themselves, was forgotten. They would remain essentially unknown for the remainder of the 19th and all of the 20th century.