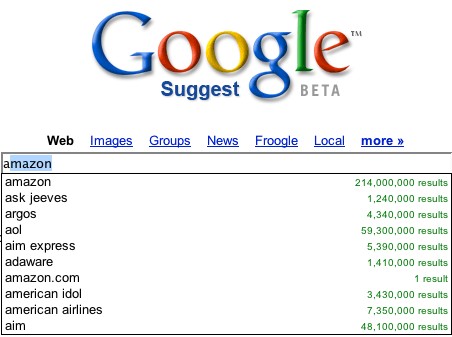 "A" is for Amazon, according to Google Suggest

Have you ever known someone who knew what you were thinking so well that they could finish your sentences? That can be annoying, but it can also be very helpful, particularly if you have trouble finishing them yourself. Sometimes, you may know the beginning of a phrase, an idiom, a book title, but can't remember the rest. If you have to write much, and booksellers are always writing descriptions, you could undoubtedly use a little help now and then. Well here it is, and it's brought to you by your mental twin, your better half, your partner in life, Google.

Is there anything Google doesn't do? This one is called "Google Suggest." I'm sure that somewhere on their site, there's a "Google Coffee" that will make a fresh cup of coffee and place it on my desk, if I could just find where on their site it is located. For now, I'll have to settle for a plethora of other interesting, strange concoctions that Google has brewed up for me. Google Suggest is such a feature, and for those who could use its assistance, or just want a few minutes of entertainment, we're here to tell you all about it.

Google Suggest looks just like the Google search page. However, as you type first letters, then words, in the search box, it offers you lots of suggestions to fill your thought. Where does it get these suggestions? From other people's searches. They keep track of how many times people search for everything, so letter by letter, word by word, they know what you are most likely to enter next, even if you don't.

So let's try a few phrases those of a literary mind might try. What comes after "uncle?" I can read your mind better than Google. You said "Tom's Cabin." So did Google, but only as a third choice. "Uncle Sam" got fifteen times as many searches. But Uncle Tom also got walloped by "Uncle Buck," a 1989 grade B movie with John Candy and Macaulay Culkin. So much for the intellectualism of Google searchers. Hick musician Uncle Kracker would also have beaten Uncle Tom were his vote not split between "Uncle Kracker" and "Uncle Cracker."

Here's one that will make you feel better. Enter "Huckleberry," and the winner is, you guessed it, Huckleberry Finn. The Mark Twain character beat Hanna and Barbera's Huckleberry Hound by a landslide. Tom Sawyer does not fare so well among the Toms. He doesn't make it, though screw-loose actor Tom Cruise, overpriced designer Tommy Hilfiger, gravelly-voiced singer Tom Waits, and Quarterback Tom Brady, even though he is not going back to the Super Bowl this year, qualified. So did an author, adventure writer Tom Clancy. Huckleberry Finn's friend did not qualify.