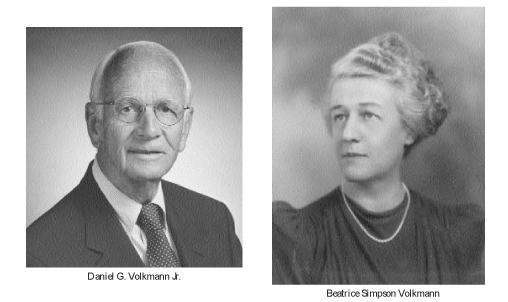 Beatrice Simpson Volkmann, collector of important Californiana and her son Daniel Volkmann, who completed her collection.

The 2003 auction year will be remembered as the one that began with the sale of an entire set of first editions of every title listed in The Zamorano 80. Assembled by Daniel G. Volkmann, the collection will be auctioned by Dorothy Sloan on February 5 at the Society of California Pioneers in San Francisco. A collection that contains both many rarities and just as many more commonly found books, Volkmann’s achievement is yet another testament to the influence of The Zamorano Club’s most enduring and famous publication. Unless otherwise noted, all books discussed below are first editions, and the lot numbers are the same as the entry numbers in The Zamorano 80. Any prices quoted from previous sales include the buyer’s premium.

Long represented as a mythical, magical place, California has been the locale of much fiction, some of which has passed almost into the realm of truth. Wierzbicki summed up the situation in 1849 when he titled his book California as It Is, and As It May Be. One of the only two authors with two entries in the Club’s list is Mark Twain, present in lots 17 and 18. The former is his The Celebrated Jumping Frog of Calaveras County (1867), estimated at $6000-12,000. This book not only made Twain famous, it introduced into Western literature an animal that became equally as celebrated as those introduced by Aesop and La Fontaine. The latter book, apparently crossing and recrossing the border between fiction and reality, is his Roughing It (1872), estimated at $750-1500, and perhaps the most popular travelogue ever written in America. A somewhat grimmer depiction of life in the area is represented by Richard Henry Dana, Jr.’s Two Years before the Mast (1840), here in lot 26, with an estimate of $2500-5000. Only partly about California, the book is probably better known for its depictions of nautical life based on the author’s experiences. Bret Harte was launched into authorial fame with the publication of his The Luck of Roaring Camp (1870), here in lot 40, estimated at $400-800. So far as is known, this is the first fiction featuring a bastard Californian as hero, who had made his appearance about two years earlier in a Harte story. Harte’s courage in taking up such an unusual character reached its fruition in Frank Norris’ McTeague (1899), here in lot 58, estimated at $500-1000. Written under the influence of French naturalists and realists, the novel was so bleak in its depictions of American life that it was widely denounced. On the whole, these works of fiction give a balanced view of California life—not too saccharin but not too bitter, either.