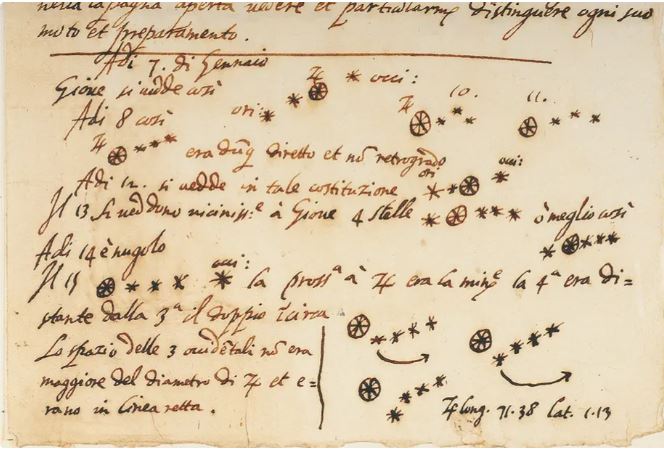 One of the prized possessions of the University of Michigan Library has been found to be a fake. It is a refrain we have heard many times in the past, and as with many of these, it is not a recent forgery. It is one that took almost a century to discover. Some of those old forgers were very good at their craft.

The item is what was believed to be a handwritten draft by Galileo, the great 16th century Italian astronomer. The first part is supposedly a draft of a letter he sent to the Doge of Venice explaining his latest invention, a telescope many times more powerful than any known before. We think of its importance for looking to the heavens, but Galileo understood another more practical use more likely of interest to the Doge – the ability to spot enemy warships offshore much sooner than possible with the naked eye. The second part is his observations of the moons of Jupiter. The final copies of these documents are real. The actual letter is now held by the State Archive in Venice. The observations on the moons of Jupiter are kept at the Florence National Central Library. That's all legitimate. What isn't is the supposed draft of these documents held by the University of Michigan.

The known history of this document begins in 1934, when it was sold at Anderson Galleries as part of the collection of the late Rev. Dr. Roderick Terry. Dr. Terry was a Presbyterian minister in New York. He was also an avid book and manuscript collector. The sale of his collection took in $270,000, a lot of money at the time, especially considering this was the heart of the Great Depression. He collected well.

Anderson described it as “a remarkable historical letter by one of the most famous scientists of all time. Believed to be the first signed autograph letter by Galileo to be offered for public sale in America.” It certainly would have been remarkable had it been real. Anderson vouched for the authenticity of the letter by saying, “A certification of genuineness by Cardinal Maffi, Archbishop of Pisa, accompanies the letter, written on a visiting card. It attests that Cardinal Maffi has compared the letter with other originals in the collection at Pisa and found it to be authentic.” That certification is missing, but it was likely real. Cardinal Maffi would not have been an expert on identifying letters, and it is likely he identified it by comparing the signature to those on other Galileo documents.

The letter was purchased at the Anderson sale by Tracy McGregor, a Detroit businessman and similarly avid collector of books and manuscripts. When he died, the Trustees of the McGregor Fund bequeathed the document to the University of Michigan. That was in 1938, and it has resided in the university's collection ever since.

The truth came to be known as a result of work by Professor Nick Wilding of Georgia State University. He is writing a book about Galileo. He has also exposed Gallileo forgeries in the past. He was examining the Michigan document when he noticed two things particularly suspicious about it. One was the watermark. The watermark on the paper of this document contains the letters “AS” for the paper maker and “BMO” (Bergamo) for the site of production. The problem with this is no other paper with this watermark from before 1770 is known, while many examples from after that date are. That is over one and one-half centuries after this document was supposedly written.

The other problem is with the document's history or provenance. There is no history of its existence prior to 1930. That was over 300 years after it was supposedly created and yet no known person had ever seen it before. That included it not appearing in the very thorough National Edition of Gallileo's Works compiled 1890-1909. If it existed, surely someone would have had it and others known about it before 1930.

Professor Wilding concluded the manuscript was a forgery, and the University of Michigan's experts concluded the same. They even have a likely suspect. His name is Tobia Nicotra, a prolific Italian forger who operated in the 1920s and early 1930s before being caught. He is believed to have faked as many as 500 signed manuscripts, primarily of famous Italians. He was very good, but not so good as to leave no traces. Still, he was able to travel to America and sell some of his documents, at one point posing as a recently deceased Italian musician. He specialized in musical compositions. He even sold two Mozart “signed documents” to the Library of Congress. He befriended the son of famed conductor Arturo Toscanini, and perhaps the one legitimate thing he did in his life was to write the first biography of the senior Toscanini. However, Nicotra also sold some musical manuscripts to Walter, the younger Toscanini, who eventually figured it out and was the prime witness at Nicotra's trial.

Perhaps the experts at Anderson Galleries should have been a bit more discerning than to simply accept a written authentication from Cardinal Maffi, not an expert in identifying signatures. He essentially looked at two documents (and as it turns out, both forged) and said they looked the same to him. An auction house would do greater due diligence today, especially since it was known that Nicotra had forged all sorts of documents, including those of Galileo. The year of the sale, 1934, is when he was convicted and sentenced to two years in prison. When he was caught, the prolific Nicotra was generating forged documents by others, including Christopher Columbus, Michelangelo, da Vinci, Abraham Lincoln, George Washington, Lafayette, and Warren Harding. Why he added Harding to that list is a bit of a mystery, but perhaps around 1930 he was more highly regarded.

The manuscript was sold to Mr. McGregor for $975 in 1934. That would translate to about $63,000 today based on typical appreciation of books. However, an original manuscript by Galileo is hardly anything typical, and you can be sure it would be worth many times that today, if only...