How Much Medieval Literature Was Lost Forever? 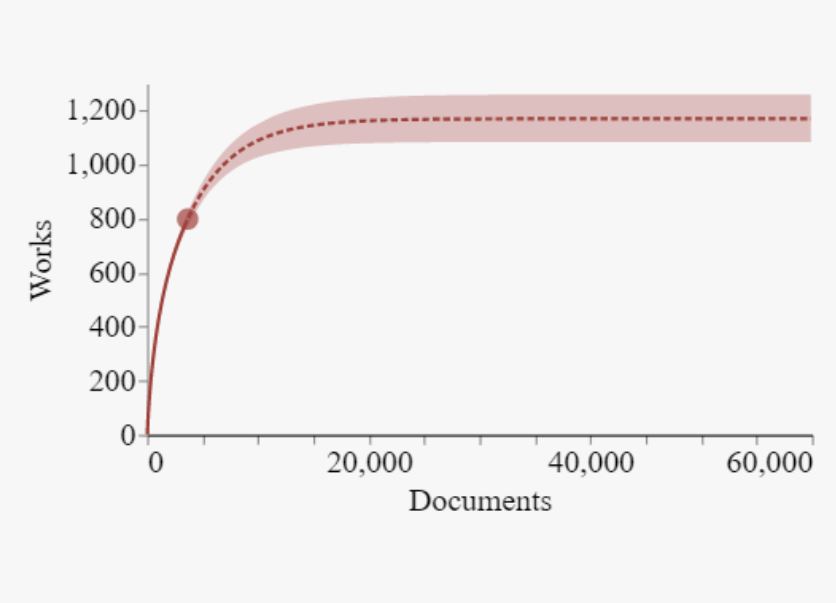 A graph enables estimate of how much Medieval literature has been lost.

How much literature from Medieval times has been lost forever? That's a hard one to answer. You can't very well count it if it is lost. What we can say is there must be a substantial amount. This period predates printing so that “books” weren't being created in large numbers of quantities. They had to be copied by hand. Nor were there many people who could read anyway, and people didn't have personal libraries. They were mostly found in the libraries of religious institutions, and in Europe, that primarily would be the Catholic Church (this being pre-Reformation). Over time, some were thrown out, others destroyed in fires or other cataclysmic events, some were washed to reuse the vellum, others used inside bindings of newer books.

Recently, a group of scholars decided to see if they could compute a reasonable estimate of what percent of Medieval texts have survived to this day. There have been some attempts in the past, which have used such methods as looking at Medieval library lists or the titles of books mentioned in other books that can no longer be found. That would provide a list of missing books known to have once existed, but leave a gap for unknown lost books. This most recent attempt was based on using a mathematical formula to make an estimate.

The group, spread across several countries, included Mike Kestemont, Folgert Karsdorp, Anne Chao and several others. Ms. Chao is the key here. Back in 1984, she created a formula to be used in estimating the biodiversity of a specific area. If people were sent to an area to count all the different species of animals to be found, large and small, they could not find them all. There might be some species represented by only one animal that was good at hiding and disguise. So she set out to determine from the number found approximately how many in total there were.

The formula is rather complex and difficult to explain, especially for someone who doesn't really understand it, so I will refrain from an attempt. You can either trust the people who devised it or not. The nature of the challenge makes it hard to definitively confirm it but it's an honest effort by some very smart people.

In attempting to figure out how many literary manuscripts have been lost, the group decided to employ Ms. Chao's old formula for counting missing species. That formula counts not only the number of species found, but how many of each. So applying this approach to old literary works, there are two numbers to count. One is the number of documents, the other the number of unique works. For example, if a library has one copy of Huckleberry Finn, that is one document and one work. If it has three copies of Huckleberry Finn, that is three documents and one work.

What you get from this is the graph on this page. It charts works on one axis, documents on the other. In the beginning, as old documents are listed, most are the first copies found, meaning every document represents a unique work. But, as searchers move on to different libraries, some of the documents they find are repeats of works found earlier, so adding more numbers along the documents axis adds progressively fewer new listings along the works axis. Eventually, the graph flattens out, meaning new documents are now virtually all repeats.

The red dot represents where we are today. It rests at 799 works, the number found today. Applying Ms. Chao's formula, known as Chao1, the estimated number of works slowly continues to rise as the number of documents found is tallied, until it essentially flattens out. At that point, virtually every document located is a repeat of a work previously found. Now we have the estimated total number of unique works. That number is approximately 1,170. Now all you need is some mathematics even I can understand – division. It is just one simple step to determining the percentage of Medieval literary works which have survived, divide survivors (799) by estimated total number of works (1,170) and you have your answer – 68% of literary works created in Medieval days have survived to today.

The scholars took their research one step further and determined survival rates differed substantially by country, with survival being greatest in island nations. Of the six surveyed, Ireland had a survival rate of 81%, Iceland 77%. Germany did well too, around three quarters. France and the Netherlands came in around half, while survival was lowest in England, 38%.