Contrary to Popular Belief, There Are Young Women Collectors, and the Honey & Wax Collecting Prize for Young Women is Now Open for Entries 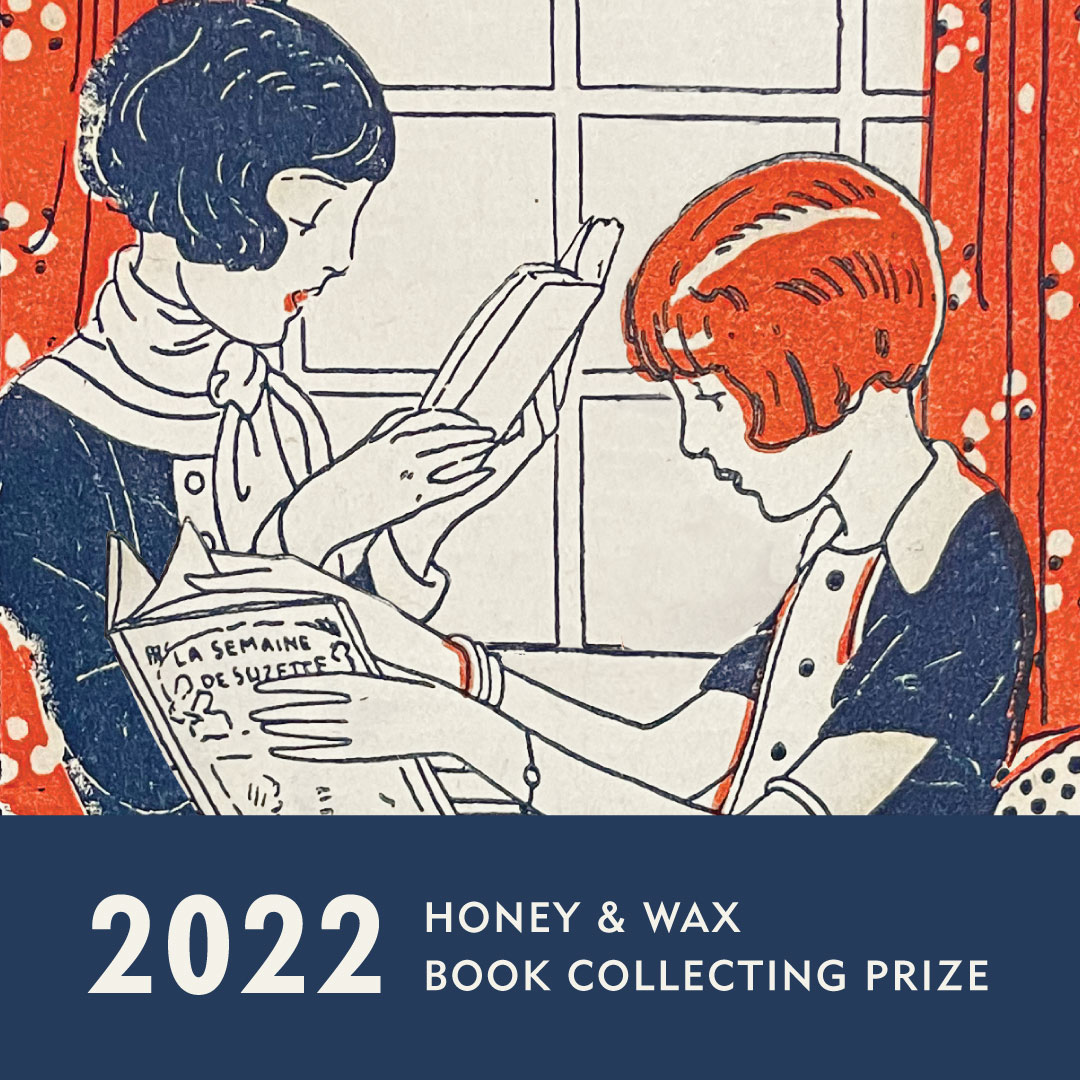 The sixth annual Honey & Wax Book Collecting Prize is open for applications from U.S. women collectors age 30 and under. Say what? Who is going to apply? Everyone knows book collectors are old men. Go to any one of the major book fairs or old-line book collecting clubs and you will see for yourself.

We asked Heather O'Donnell, who with Rebecca Romney founded the Honey & Wax collecting prize in 2017, where they find these elusive new collectors. It turns out they are out there but go unnoticed as they are not traditional collectors, may not even see themselves as book collectors. They are more likely to be found on social media and the internet than traditional collector venues. Their interests are different. They collect, just not the same things as earlier generations.

Heather O'Donnell explained, “Rebecca Romney and I started the Honey & Wax Prize in 2017 in part to counter the common wisdom that 'women don't collect' and 'young people don't collect,' comments we heard all the time as dealers at the book fairs you mention. We wanted to shine a light on the kinds of collecting happening outside the fairly insular antiquarian book world, which does, as you observe, traditionally skew older and male. Most of our prize contestants had never visited a rare book fair or auction or gallery -- in part, because they were young, without a lot of money to spend, and in part because those venues didn't do much to draw them inside.”

Looking at the topics of the past five winners reveals different interests from most traditional collectors. They were not of famous authors like Hemingway and Dickens, nor common subjects such as Americana or travels and voyages. They were: Romance Novels of the Jazz Age and Depression Eras, Collecting Leo and Diane Dillon: Six Decades of Unparalleled Illustration, Crimes of Passion: Collecting Fan-made Comics and Doujinshi, Building a Nation of Little Readers: Twentieth-Century Yiddish Primers and Workbooks for Children, and Maria Mitchell Through Time. That's Maria Mitchell (the 19th century astronomer) rather than Margaret Mitchell. That's a change. Runners-up revealed similar new interests such as small circulation self-published zines, how soldiers die, “Collecting Black Equestrian History to Prove We Exist,” Icelandic sagas, history of disasters, and twentieth century travel guides to Russia and the Soviet Union (you don't want to go there now).

Ms. O'Donnell noted, “We do find that there is an increasing interest in collecting of all kinds, not just books, among younger women, and younger people generally, driven by communities formed on social media. A striking number of the book collections submitted to the Honey & Wax Prize have a social aspect: they're the subjects of blogs or Tumblrs or Instagram feeds, they're formed through fan communities or online networks, they're created as community resources or public archives.

"The internet has made it possible for everyone to share their collecting projects much more widely, at an earlier stage, and to collaborate with others on bibliographies of material that falls outside the standard reference sources. The result is that more material, of all kinds, enters the conversation, and our collective sense of possible objects and angles of inquiry is expanded. As booksellers, that's really what we like to see, and what this prize celebrates.”

In reaching out to all new, non-traditional collectors, the contest rules state that they use an expansive definition of 'women' to include trans and other gender non-conforming individuals. We can also note that past contestants include numerous racial and ethnic minorities, and it is doubtful that most are the beneficiaries of great family wealth. It moves us even further beyond the typical stereotype of a book collector as being not only old and male, but overwhelmingly white and of healthy financial means. These collectors, to use a phrase previously coined, look more like America than the old image. If you limit “collectors” to the traditional model, of course it looks like there are few new collectors, but if you look past old stereotypes, you can see the future.

Submissions for the 2022 Honey & Wax Collecting Prize are being accepted through June 15. Books, manuscripts and ephemera are all appropriate collectibles and the theme can be whatever you find fascinating, be it a writer, illustrator, subject, printer, bindings, or whatever else is the collection's focus. Size and value aren't important, so long as you created the collection and show how the pieces illustrate the theme. Creativity and originality are welcome. Details on the rules and how to submit an entry are found on the following page: www.honeyandwaxbooks.com/prize.php

The prize winner will receive $1,000. Everyone is encouraged to submit as describing it for others will help you understand your own collection better. Maybe only one person can get the prize, but everyone will be a winner.