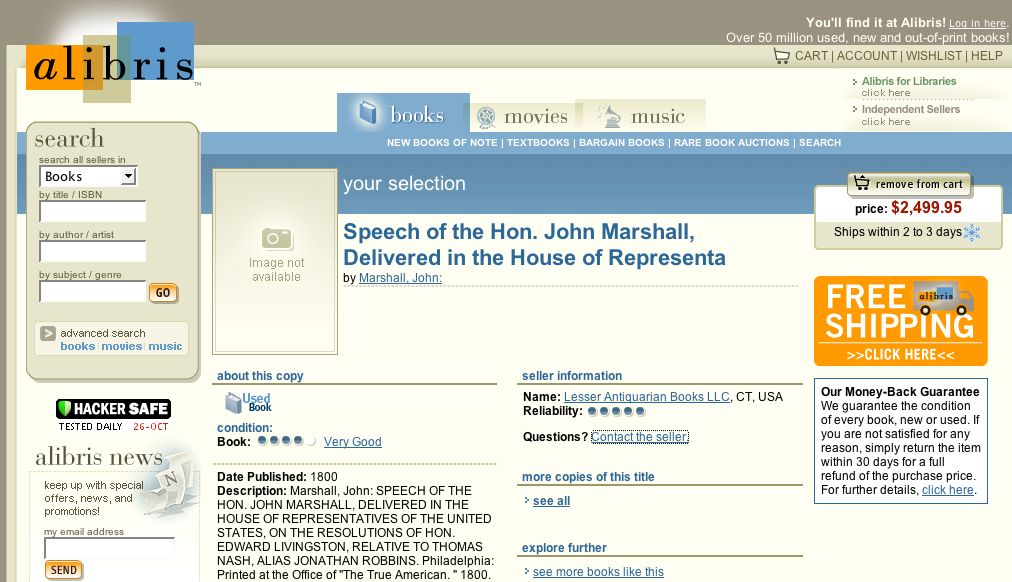 Once you place an item in your shopping cart, a small seller contact link appears.

Alibris recently conceded that the end has come to its reseller relationship with online book and everything else giant Amazon.com. Last month, Amazon announced that it would no longer accept listings from "aggregators," other book listing sites which provided them with bulk listings from their booksellers. Starting sometime in October, Amazon said, booksellers would have to set up their own individual accounts on Amazon and deal directly with that online seller.

Abebooks, the other aggregator, immediately notified its sellers that the relationship was over. Alibris, a pioneer in such programs, went back to Amazon in an attempt to change its mind. Ultimately, Alibris earned a one-month extension, but that was all Amazon would grant. The result is that the Alibris-Amazon program will come to an end in November. In their announcement to their booksellers, Alibris pointed out that Amazon was their first partner eight years ago, that they had made numerous investments in the relationship, and helped launched Amazon's zShops program. That, as they say, and a dime, will get Alibris a cup of coffee with Amazon. Alibris also noted that it maintains "partnerships with dozens of leading libraries, retailers, and distributors."

Alibris then added an act of goodwill for its sellers. They told their members that they will prepare some tools that will help those sellers who wish to continue to list on Amazon migrate those listings, and manage their Amazon accounts. "We understand the value and importance of this channel and will help transition sellers who can afford to pay Amazon.com fees," Alibris stated in their letter to members. The tools will be available in early November and are offered free to Alibris sellers.

We asked A.J. Kohn of Alibris whether Amazon's decision was based on problems they were having with the aggregators' sellers or a simple desire by Amazon to exclude the aggregators from their sales. His response was a neutral, "I can't comment on their motivation." However, he did go on to point out that Alibris' sellers maintained decent ratings. "What I do know", Kohn stated, "is that prior to their decision, other aggregators had some quality issues. This may have reflected poorly on all aggregators in general. Alibris maintained solid positive feedback (90%) and a decent rating (4.6) across our 20 regional accounts." Alibris attempted to alleviate quality issues by offering to restrict uploads to Amazon to "five star" dealers, but Amazon rejected this offer. "In addition, we were unable to reach agreement on proposals to restrict the program to five star sellers and other measures that would have improved performance," Kohn said.