Time From Another Time 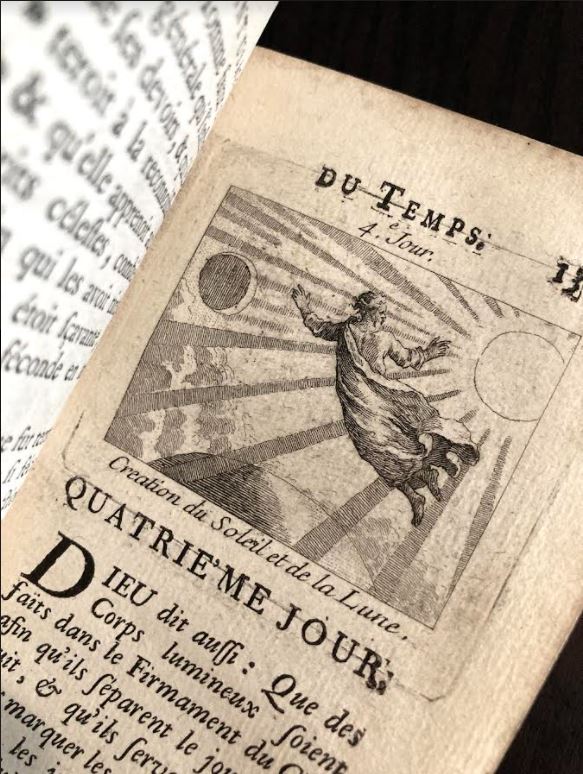 The Spiritual Treasure of Youth

Do you have a moment? Let’s talk about a very discreet book, then—that no one really notices any more.

This book is very hard to come-by—but if you ever do, it won’t cost you a fortune. This is a humble in-12° volume entitled The Spiritual Treasure of Youth, or The Saint Use of Time (Paris, 1764). These kind of religious books were legion at the time, and I guess they were part of any bookseller’s back catalogue. This one is aiming at kids—but also at “the heads of Christian families”, as it intends to ”remind them each month of a mystery of religion and to tell them how to worship the supreme majesty.” That might sound like a bad start—most of those proselyte books are pretty indigestible. But there’s something touching about this particular one. It might be because of its childlike approach. The engraved title page calls for 52 figures! On the frontispiece, Knowledge is reading a book to a group of children while an angel is floating over them, casting a bright light upon the whole scene. “Figures are used here,” the preface resumes, “as the most efficient means to strike and grab children’s attention; they make learning a less dry and repulsive process.” I must confess that it worked wonders on me.

Today, this book is in limbo. It is listed nowhere. Google Books didn’t care digitizing it. Les Almanachs français (Gallica) mentions it, but in a rather laconic way: “It was sold for 6 sols. True enough, the youth couldn’t complain to get a spiritual treasure for such a bargain.” That’s it for the Internet. I’m not trying to say that this stone that the builder refused should be the head cornerstone of any book collection. Maybe I’m getting old, maybe “time” is catching up on me, but I find myself interested in some of those out-dated book. They remind us that Man was once the centre of the Universe. We were then living under God’s watch, and simple religious rituals ruled our lives. Even time was on our side, then. I’m not naive. Religion was also a political tool, and there’s a lot of ignorance about this little book. Yet, this simple representation of God is moving and reassuring. Here He is with His long white beard, sitting in the clouds while “creating the light”, floating in the heavens while “creating the firmament” or standing on the sea shore to “separate the waters of the earth from the waters of the heavens”. It’s all so clear, so magnificent. The text was printed first, while space was left for the engravings. As a result, most of them are slightly tilted, and it adds beauty to the whole. French people love everything that is “small”—or everything they love becomes small, or “petit”. For instance, a good restaurant is a “petit restaurant”; and a good wine is nothing compared to a “petit vin”. No wonder these small engravings were attractive at the time. They owe a lot to the talent of the anonymous engraver. “He had to adapt to the small format,” the prefaces reads, “and he gave the best of himself to depicts such important topics in such small spaces.”

The chapter regarding the creation of the world is the best one, but there are many interesting parts about the seasons or the four parts of day. The book also tells when to sacrifice, and when to pray or fast. While living in a world that is spinning so fast, while rushing through our lives like they should never last, this petit book from another time as such a soothing effect. It teaches us that a moment of calm might not be a waste of time—and this lesson is a spiritual treasure indeed.