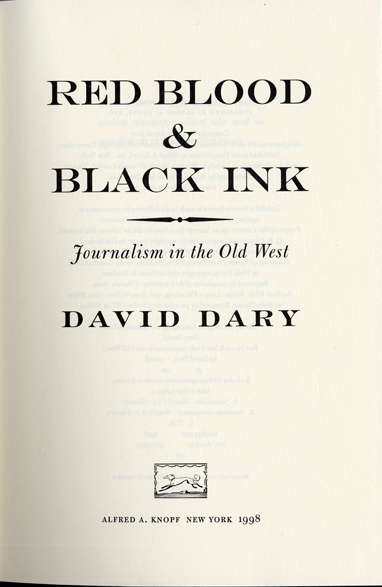 This book will instill interest in newspaper collecting


Many eBay sellers rely on listing sites such as Abe and Alibris for their descriptions and rarely find a close match for their material. With no text and prices to copy they tend to offer minimal descriptions and generally low prices. Hence the potential bargains. On the other hand if you are going to be a bidder you need to do your homework.

Here are some basic resources:

Mott, Frank Luther. American Journalism: A History of Newspapers in the United States through 250 Years. First published in 1941, revised and reprinted several times and extended to...260 Years.

For those who are more interested in early newspapers in the American west I recommend David Dary's Red Blood & Red Ink, an account of newspaper publishing in the early days of western expansion and settlement.. If you are leaning toward becoming an outright newspaper collector or adding newspapers to the mix of material you acquire in pursuit of your personal focus Dr. Dary's book gives life to many of the names found just under the mastheads: the printers and publishers. It's in print.

Frederic Hudson: JOURNALISM IN THE UNITED STATES FROM 1690 TO 1873. New York: Harper & Brothers, 1973. This 789 page work is the earliest comprehensive history of American journalism. It spans 1690 to 1872 and includes some information on journalism west of the Mississippi. It was reprinted in 1968.