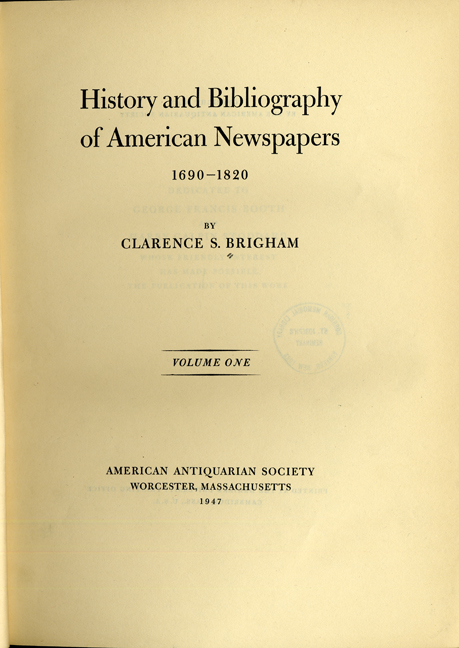 
They are also uncommon although it doesn't seem that way to someone running searches on eBay, today's dumping ground for old newspapers. They come up with misleading frequency that is at odds with their rarity [which is not to be confused with importance]. The same newspapers do not often appear but random newspapers, both loose and bound, are constantly appearing. You'll look in vain for a specific publication; stand little chance of finding a particular year and no chance of finding a particular issue. Nevertheless random publications are constantly coming up because there have been so many of them. According to Clarence Brigham in his History and Bibliography of American Newspapers [1947] in the period prior to 1821 2,120 newspapers were known to have published at least once, 1,118 lasted less than two years, 1,002 lived from two to four years, 541 from five to nine years, 302 from ten to nineteen years, 106 from twenty to twenty-nine years, 34 from thirty to thirty-nine years, 15 from forty to forty-nine years and 10 from fifty to eight-seven years. Since 1820 the numbers have increased exponentially. In other words, there are thousands of titles, relatively obscure documentation and absolutely random distribution: in short - a very disorganized market.

Add to this the imprecision of eBay searches. A search for NEWSPAPERS recently yielded 35,689 matches when I searched title and description, 3,938 when I searched the title alone. When I searched "bound newspapers" I found 426 title and description matches, 22 by title-only. I then added a state: NEW YORK BOUND NEWSPAPERS found 83 in title and description. The numbers are impressive, the results less so. These searches depend on information sellers provide and many aggressive sellers load their descriptions with thousands of words of boiler plate junk that is intended to create matches without any regard to whether they are accurate. eBay doesn't seem to care that this wastes prospective bidders' time so you'll pay the price by having to wade through inappropriate matches. It's slower than it should be but still fast compared to random place searches. And its always getting better.

On the other, if you go to Abe and use "bound newspapers" in the advanced search screen keyword field you get 5,276 matches. Abe provides an optional date range and this enormously simplifies the search. For 1700 to 1800 there are 30 matches and for 1801 to 1850 98 more. Abe however also permits sellers of photocopies and reprints to mix their listings in with real material. It wastes time to sort through traif so select the option to sort by highest price first, the reprints disappear and you begin to see the other side of the old and historical newspaper market: material offered for several thousand dollars. Now when you go back to eBay to follow the newspaper market you can sense there some attractive bargains though you'll have to work to find them.