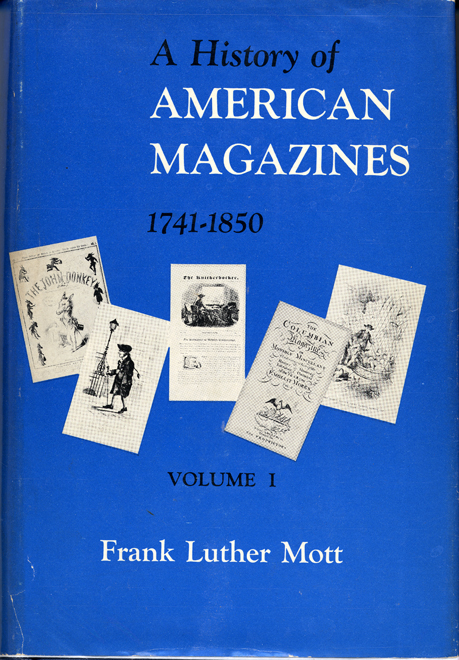 If you are going to buy older magazines you will need this set.

You could think the entire field of collectible history is found between the covers of books. You would be wrong but you would not be alone. Books tend to be reviewed when they first appear, are picked-up by bibliographers within a few generations and then begin to appear in dealer catalogues and auction descriptions in time giving the first and other early editions a second life as valuable and collectible. Of necessity book dealers engage in a triage by exclusion that further narrows collectible material to a group of predictable titles that bibliographers, book dealers and auction houses coalesce around for mutual protection. Often it comes down to buying and selling what is referenced and ignoring what is not. The collector, and to a lesser extent the librarian, look for documented titles. They're safe. It also leaves a vast amount of material out. In books a high percentage is abandoned, in manuscripts most is ignored and in ephemera essentially all is forgotten. Pity the collector that is limited to what others say is important.

Among the things not found between covers on a regular basis are newspapers and magazines: the enfant and juvenile that report and analyze events before the first books are written. Because they are temporary, often perishable they are somehow less valuable or so the market says.

Storied collections of newspapers have been built over the past thirty years by those who asked libraries and other institutions to sell such materials they rarely used and no longer seemed to want. Often stacks of newspapers changed hands for free or for pennies and the buyers assembled astounding collections of first day accounts of important events. Even today this material continues to come out of libraries albeit with somewhat better valuations attached. This continues to occur because libraries, the original repositories of these first day accounts, are no longer the natural owners. For them micro-fiche and fully digitized images are more practical because old newspapers and magazines don't long survive when frequently touched. For them digitization is inevitable as is the logic that only a few complete electronic sets be created. For libraries who field the occasional research request an online link to a centralized collection is less expensive and more productive. Libraries have long known this and have been de-accessioning their older periodicals for decades. In many cases, where no digitized copies exist the hard copies are never-the-less removed. The value and importance of peripheral publications, if demand and cost-to-keep are factored in, often make them first victims of budget crunches. They take up space, are rarely requested and deteriorate.