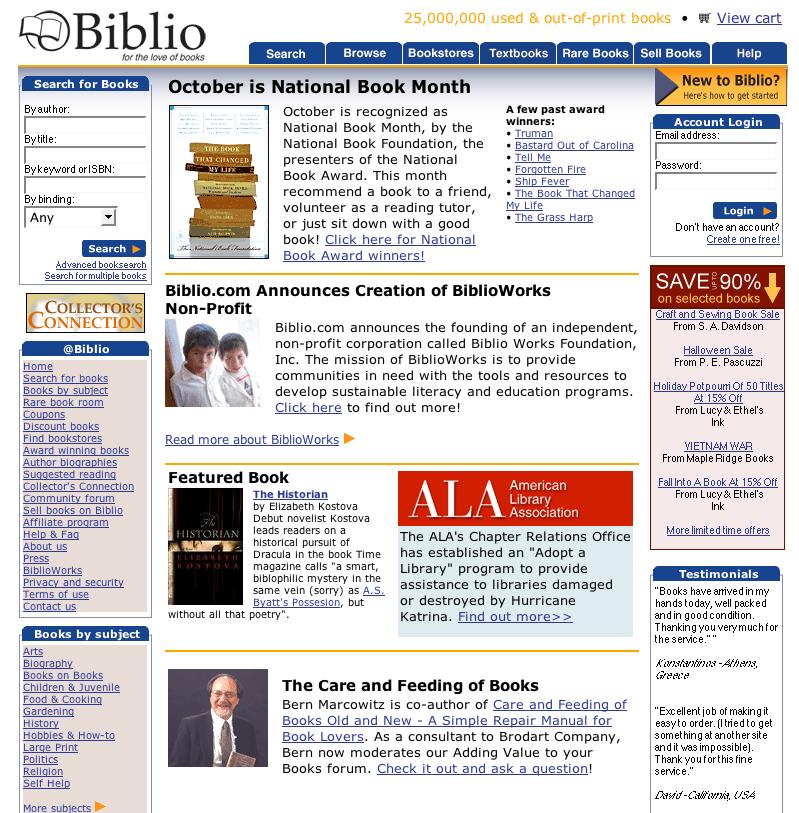 Biblio has grown to be the third most popular book listing site.

If Number 2 needs to try harder, what must Number 3 do? This month we posed that question to Biblio, the online bookselling site that has moved into third position in this extremely competitive and narrowing field. Perhaps they are the ideal candidate to ask this question, as somehow, Biblio has been defying the odds and managing to grow in an environment that ought to be choking them.

At the turn of the millennium (a literary-sounding way of saying 2000), there were dozens of online bookselling sites competing for market share. Biblio wasn't one of them. They arrived in 2003, long after most bookselling sites were deep into retrenchment. To understand how remarkable their success has been, just take a look at the normal evolution of new technologies. New technologies spawn new businesses in a predictable manner. In the early stages, dozens compete to get a foothold. Soon, a very small number, perhaps just one or two, emerge as leaders. The others hang on, hoping for a miracle, or at least a combination or buy out which will enable them to make another run at the top. A few may evolve into something else, perhaps surviving by serving some highly specific small niche. But, for the most part, it is over for those who were not among the first few to emerge as leaders.

If you look back to the pre-2000 internet "bubble" days, you will find there were many search engines that people selected among. Today there is Google. Sure, some people use the searches on major destination sites like Yahoo and MSN, but for pure search, who else is of significance? "Google" has even become a verb. We may "google" something, but does anyone ever "altavista" something, or "lycos" it? Once upon a time there were several online auction sites. There still are, but can you name any that don't begin with the letters e-b-a-y?

So into this maturing online bookselling environment, with Abebooks and Alibris already established as the leaders, and the rest fighting for either a niche or mere survival, Biblio was born. Born too late. By all logic, the game was already over. This baby should have died in infancy. Yet here it is. Biblio is not only still around, it is growing. It has managed to leapfrog the entire field save the two megalisters at the top. And, its environment is even tougher than having two strong market leaders ahead of you implies. There may be only two pure competitors ahead, but there are also the likes of Amazon, Barnes and Noble, and eBay/Half up there. They aren't pure competitors in that they do much more than old books, but they compete for old book listings nonetheless, and each carries far more market recognition than any of the pure book listing sites.

From its beginnings in 2003, Biblio has grown from nothing to carry 25 million listings from 3,500 dealers today. The market leaders are Abebooks, with a stated 75 million listings from 13,000 dealers, followed by Alibris with 50 million listings. After Biblio, the next in line is believed to be ZVAB/Choosebooks. While Biblio still has a long way to go to catch the top two, their growth has been extraordinary. Besides which, they really aren't that focused on Abe's and Alibris' numbers anyway. Perhaps that explains their surprising success while most book listing sites have been slipping into oblivion. To discover how Biblio has done so well in a seemingly impossible environment, we went to Kevin Donaldson, Biblio's Director of Sales and Marketing.