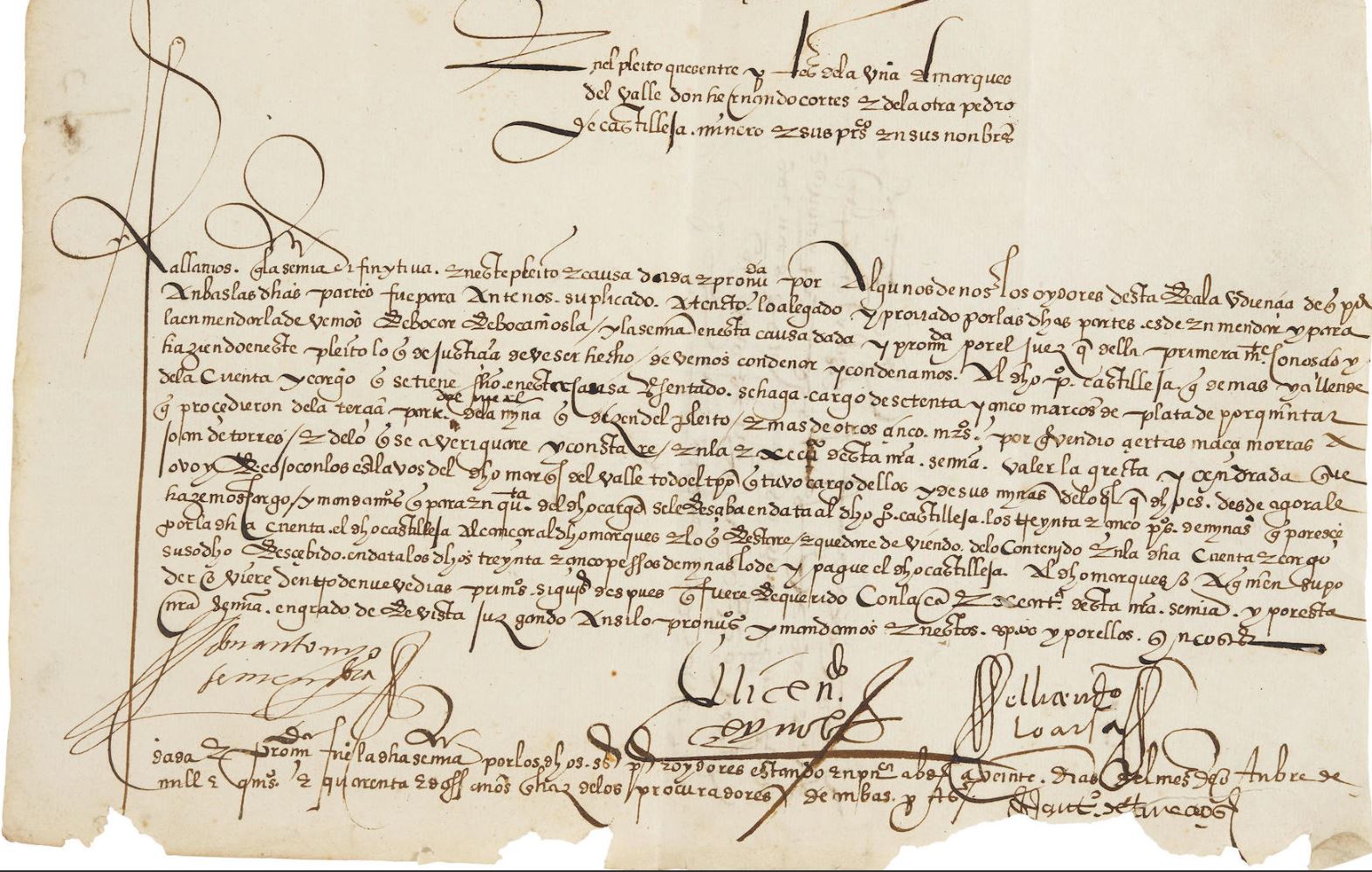 One of the stolen Cortes letters.

Theft of books and manuscripts has long been an intractable problem for library and other institutional collections. The presence now of a stolen book database makes it harder for thieves to sell this material, but unfortunately, institutions are not always aware of what is missing. Sometimes they don't even know what they have. The result is this sort of merchandise can show up for sale at auctions or from dealers with no one being the wiser. That takes us to this story of ten letters and documents five centuries old whose theft has only recently been made clear.

The letters were written by Spanish Conquistador Hernan Cortes, whose conquest of Mexico was one of the more momentous events in the history of the Americas. By convincing some natives to help fight others, he was able to defeat and end the Aztec Empire, a people not prepared to suddenly be invaded by a brutal foe. Cortes' historic role made these letters very valuable. While Cortes letters are uncommon, this sizable group of them started showing up at auction in 2017, ten in all between then and 2020.

This unexpected activity led a group of scholars based in Mexico to become suspicious. They began looking at past auctions and, according to Reuters, found Cortes documents had been sold at Swann's, Christie's, Bonhams, and Nate D. Sanders between 2017-2020. But, where did they come from? The scholars contacted María del Carmen Martínez Martínez, a Spanish historian and expert on Cortes. That proved to be an excellent choice. Ms. Martínez Martínez had visited the National Archive of Mexico (AGN) in 2010 and 2014 and taken thousands of photographs. She began combing through them to see whether any matched the photos in the auction house listings. She found a perfect match. The writing in the auction photo document was identical to that in one of her photos, and it was even missing the same triangular shaped piece of parchment in the left margin. They knew where this one was from. Ultimately, she found matches for eight of the documents in her photographs.

The scholars next turned to the Genealogical Society of Utah, part of The Church of Jesus Christ of Latter-Day Saints (Mormon) headquartered in Salt Lake City. The church has done an amazing job of gathering genealogical evidence all over the world to enable people both in and outside of their church to determine their ancestry. They had photographs taken at AGN in 1993 on microfilm, and when those were examined, they found nine matches. A written description was also located for the tenth document.

AGN is located in what is believed to be a fairly secure location, a one-time prison, but their inventorying leaves much to be desired. A representative of the archive indicated that only 40% of the material has been catalogued. With the rest, they don't know what they have. In this case, the photographs enabled them to determine where these documents had been kept. Further investigation revealed that they had been neatly excised from their bindings. Considering the security, there are grave suspicions that this was an inside job.

The scholars notified authorities much earlier, but never saw any signs they were making serious efforts to resolve the case. That is what led them into their own sleuthing and the uncovering of the what, though not the who. Mexican and American authorities, when contacted by the press, gave little in response other than the standard “we are working on it.” Presumably, at some point we will hear from them with an explanation and maybe the names of suspects.

There are excellent, extensive articles on this story to be found, recently in Reuters and earlier in the El Paso Times.