Another Astonishing Record Price for a Sports Card – This Time Hockey 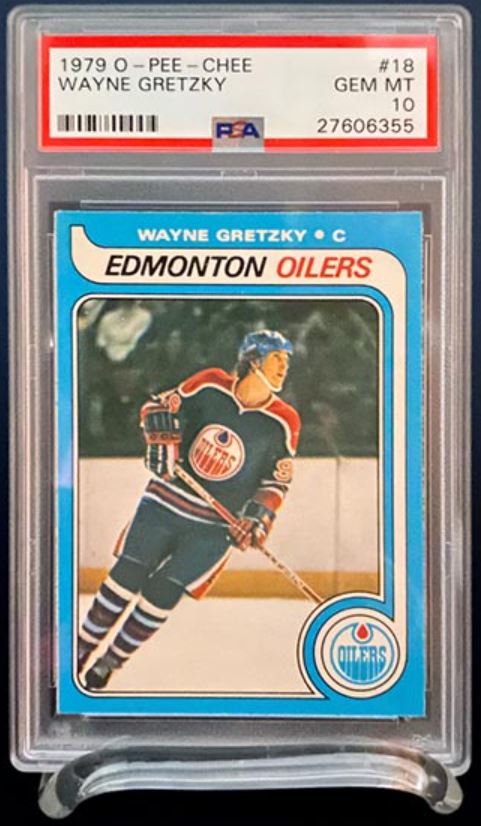 In 2016, a baseball card sold for the astonishing record price of $3.12 million. This wasn't any sports card. It was the Holy Grail of all cards, the circa 1909 Sweet Caporal Cigarettes Honus Wagner card. Johannes Peter Wagner was a great baseball player though few would call him the best ever, above Ruth. Still, its age and rarity was enough to generate a price this high. Poor Honus never made over $10,000 in a season for actually playing the game.

Less noticed, but that same year, a record price of $465,000 was paid for a hockey card. A hockey card! Hockey is not the biggest sport south of the 49th parallel, less popular than baseball, football, or basketball. Nonetheless, all types of sports cards were then starting to come into their own, and this was the Holy Grail of hockey cards. It was the O-Pee-Chee rookie card for Wayne Gretzky, the most famous and likely the greatest hockey player ever, in mint condition, grade 10. At the time, it was the only one known to exist. Still, this price tag was a bit surprising.

Fast forward to December 2020. Now, two are known to exist. Another grade 10 Gretzky O-Pee-Chee rookie hockey card comes up for sale at Heritage Auctions. It establishes a new record for a hockey card, $1.29 million. How high can they go? We just found out. Considering that previous high, it is beyond astounding. This time a Gretzky grade 10 rookie O-Pee-Chee card sold in a private sale arranged by Heritage. The price was $3.75 million. That is almost three times the price as the record price established for this card just 5 months earlier. That price also exceeds what was the highest price for any kind of sports card just 5 years ago.

The buyer and seller have chosen to remain anonymous. Heritage quoted the buyer as saying, “Throughout many years of collecting, this card has always been our 'white whale.' Our family is thrilled to become the new guardians of this world-class hobby treasure.” I would have said, “What was I thinking?”

How high can these prices go? Who knows? How high can bitcoin or Tesla stock go? As long as people keep bidding them up, they will go higher. So far this year, cards for all of America's favorite sports, baseball, football, basketball and hockey, have reached record prices. None of these prices was even close to the previous record. A Tom Brady football card sold for $1.32 million, eclipsing the previous record $840,000 for a Patrick Mahomes card. A basketball card for 22-year-old Luca Doncic went for $4.6 million, more than doubling the previous record $1,857,300 for a Giannis Antetokuonmpo card. And, a record for all types of cards was set for a 1952 Mickey Mantle baseball card, besting the then record $3.93 million for a Mike Trout card. It sold for $5.2 million. The previous records were set either earlier this year or last year. All of those record holders, either old record or new, besides Gretzy and Mantle, are still active. These aren't historic, Honus Wagner era cards, but mostly very recent ones.

You might say this madness has to stop. This is a bubble. Prices must fall back to earth. You are probably right, but we all would have said the same thing a year ago and missed on an opportunity to double our money. Some people say that bitcoin will go to half a million dollars. Others say it will become worthless. Maybe both are right.