Amazon Cuts The Cord: Now What For Abe and Alibris? 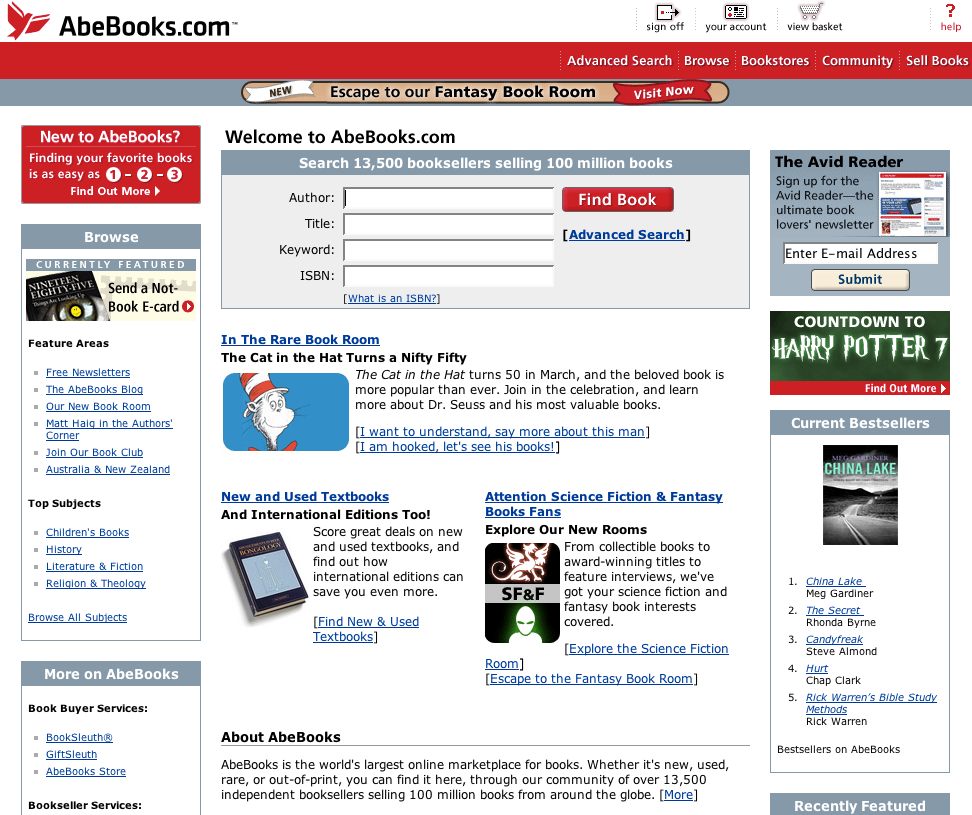 Abe responded to Amazon by saying it would go it alone.


The responses to Amazon's withdrawal by Abe and Alibris were polar opposites. It will be very interesting to see which plays their new hand best. First we'll look at Abe, which has already been attempting to make major changes in its business model, and which will now have to make even more.

In a letter to their booksellers from President Hannes Blum, Abebooks tried to put as good a spin as possible on Amazon's decision to walk. Of course they already have some experience with this process, having had to deal with a similar rebuff from Barnes and Noble a few months ago. While acknowledging that some would find this change "disappointing," Abe said that "we believe that in many ways this is also a new opportunity for us all." Then, as if to prove that they really mean this, rather than just putting on a good face, Abe announced that they would in turn be dumping Half.com, the one outside site where their listings could continue to be posted. In order to focus on internal growth, Blum said, "we have decided that the time has come to say good-bye to Half.com as well." Now it can be pointed out that Half has not been a major seller for Abe, certainly not on a par with Amazon nor even Barnes and Noble, but it does give Abe the opportunity to be the one ending a relationship, instead of always being the rejected suitor. And, by making this move, Abe can give credence to its claims that it is choosing to develop a totally independent business model, rather than having such a plan forced upon it. Abe's plan now is to place their entire focus on their own site.

At Alibris, the reaction was totally opposite. At first, they said nothing. However, Abe's comment that Amazon was dropping all "aggregators" implied that Alibris would be out the door too. Alibris was forced to issue a response to its enquiring dealers, though clearly they would have preferred to delay comment until they had more time to speak to Amazon. When they did respond, Alibris made no attempt to spin this as a positive development or give any "new beginnings" type of gloss to the changes. They clearly stated their disappointment and their intentions to try to convince Amazon to change its mind, or at least find another way of continuing the relationship. In their statement, the company said, "Alibris remains committed to helping booksellers sell on Amazon.com and continues to discuss new approaches with them."

Then, in a message that must be intended as much for Amazon management as their own booksellers, Alibris went on to describe all of the time and money they have invested in making the Alibris-Amazon relationship work. "Last year, we successfully built systems that enabled us to manage multiple Marketplace accounts. We recently invested in technology to enable sellers to more easily sell pre-ISBN material on Amazon.com," Alibris noted. They go on to note that they first partnered with Amazon eight years ago. As Amazon has made changes, "Alibris made the investments necessary to accommodate these changes. We helped launch booksellers on zShops in 1998, we were a pioneer seller in Amazon Auctions and on Amazon Marketplace." There is no attempt to paint a happy face on this development as with Abe. Instead, Alibris has chosen to take whatever steps it can to convince Amazon not to scuttle their long-running partnership, and they are not afraid to let their dealers know they are fighting the change, though ultimately this may be a battle they cannot win. Give Alibris credit for being forthright in their response to Amazon's decision, and fighting for what they believe to be in their and their dealers best interests, even at the risk of further publicizing Amazon's rejection.