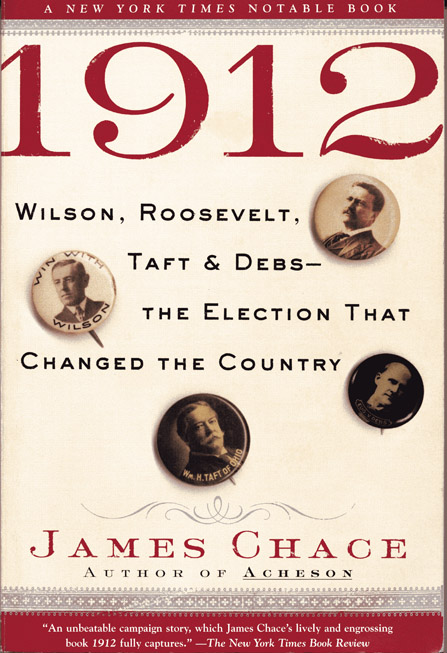 What has changed in a hundred years? Apparently nothing.

The subtitle describes this book succinctly: 1912: Wilson, Roosevelt, Taft & Debbs - the Election that Changed the Country. What? You weren't aware that this election foreshadows many of the conflicts we still experience today? Well this is the supposition of its author James Chace, also author of Acheson and he gains the support of the New York Times for the quality, if not the conclusions, of this work as they designated it a Notable Book in 2004. The Times describes it this way: "A lively, engrossing history that sees the presidential election of 1912 -- all four of its principals versus one another -- as setting up the conflict between progressive idealism and conservative values that has played itself out ever since Roosevelt, who had crowned Taft, rose in rebellion against his own party."

If your eyes slipped back to reread "four candidates" you are not alone because most readers will be hard pressed to recall the presidential elections that had three viable candidates: 1948 and 1968 and virtually no living American can remember the election of 1912 when there were four: Woodrow Wilson, Democrat, Howard Taft, Republican, Theodore Roosevelt, Progressive and Eugene Debs, Socialist. Some will recall that Wilson won the election.

Perhaps another way to understand why this election was particularly important is that, looking back, it can be seen to foreshadow the important ideological divides that are the norm in American politics today: big government versus small government, liberal intervention versus conservative withdrawal, the opening of opportunity to more participants versus the preservation of advantages for the establishment. Almost a hundred years have passed since the 1912 election but the issues debated and fought over then remain the fundamental issues we argue over today. This suggests that political perspectives tend to stagnate for long periods and then to shift rapidly because of gathering social forces. One can hope the next set of changes comes soon.

In 1912 Roosevelt, a Progressive who believed in big government, Wilson, a Democrat in the states rights tradition of Thomas Jefferson, Taft, a Republican and incumbent carrying on the progressive intervention of Roosevelt while succumbing to conservatives in his party and Debs, a Socialist carrying the banner for emigrants and the emerging labor perspective met in the electoral field of battle in the run-up to the election. All the important threads of 21st century politics came into view. Even women, who would not become eligible to vote until 1920, were in the final stretch of their campaign to achieve suffrage. In 1912 it was only a matter of time.

Roosevelt was as deeply committed to conservation as he was to strong central government. Both issues have now become primarily Democratic party platform staples. The Democratic Party of Wilson is now embodied in the Republican Party. It was Wilson, the southern apologist, who made his reputation as an internationalist. He sought to save the world but did nothing to ameliorate the plight of blacks, positions that today fit comfortably into the Republican Party agenda.