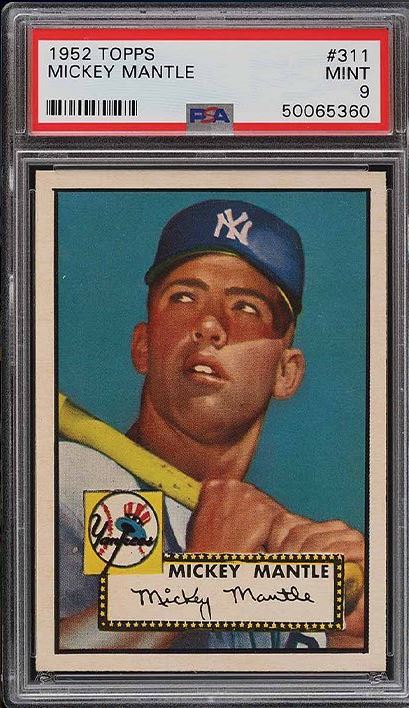 A new record price has been set for a baseball card, and this time it topped $5 million. The card is a Tops 1952 Mickey Mantle rookie card, sold by PWCC to Indianapolis native Rob Gough. The final price was $5.2 million. It leapt over the previous high price of $3.93 million paid for a Bowman Chrome Superfactor purchased last year. That was a rookie prospect one-of-a-kind Mike Trout card created in 2009. If you are wondering what the Mantle card cost new, it was 5¢, and with that you got four other cards and a stick of gum.

For reference, the highest salary Mantle ever made was $100,000 and his total career earnings were $1.12 million.

This Mickey Mantle card is graded a 9 on a scale where the very best condition is a 10. It is one of only 6 known cards graded at 9. There are also 3 that are graded a 10 and one can only imagine what those might bring.

While many people remember watching (or listening to) Mantle play, Rob Gough was not one of them. He was born in 1969, the year after Mantle retired. Nonetheless, he has been looking for this card for years. He has owned Mantle rookie cards before, but always of a lower grade. He has described the card he purchased as the “Holy Grail” and the “Mona Lisa” of baseball cards (although, in fairness to the Mona Lisa, it is more like a superfractor card – one of a kind).

Your immediate reaction may be that Gough is an idle rich man foolishly throwing his money around. Gough is no fool or amateur investor. He made his fortune as an entrepreneur and investor, buying and selling businesses, most recently the clothing brand Dope. He is a savvy investor. That is not to say this is merely an investment. He is a collector who has long dreamed of owning this card. Nonetheless, he has a keen eye for value. Overpaying is not part of his nature. Forbes quoted him as saying “I think I got a tremendous deal on this card,” and that he believed it was “massively undervalued.” That might sound like an exaggeration it having sold just a little over two years ago for only $2.88 million (the second highest price ever paid for a baseball card at the time). Again, Gough is a smart investor and he has his reasons for saying it is a deal. He told the Indy Star that less iconic cards have sold for ten times their previous price over the same time period. This one is less than a double. Maybe he is onto something.

However, Gough made one claim to the Star that I still question. Noting that “anything is possible,” he said “Anybody from Indianapolis can do the same thing.” If so, those Indianapolitans are wealthier than residents of any other city I know.