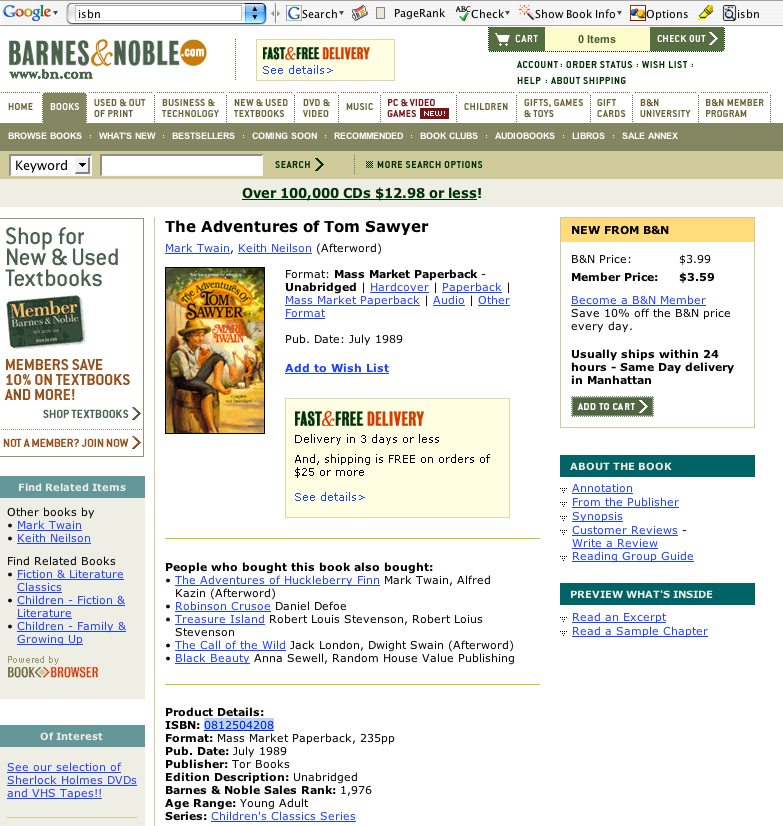 The ISBN number near the bottom of this Barnes & Noble listing is highlighted by Google to show it is a link.

It is every bookseller's worst nightmare. You post a book for sale, on a bookselling website, or maybe even your own site. However, somewhere along the way, some insidious software redirects your customers to another site where someone else makes the sale. In an era where computers get hijacked by spyware, adware, and various pop-up windows, these nightmares are no longer beyond the pale. Such software can readily be developed and stuck on your customers' computers by unscrupulous merchants or promoters. But could it be done by Google, the epitome of online ethical behavior?

A few years ago, a program to convert copy on a website to links to an advertiser was apparently developed by Microsoft. The idea was that the software would look for terms, for example, "Rolex watches," on the site. If they showed up, the words "Rolex watches" would become a link to an advertiser who was selling them. While that might sound harmless, it becomes downright insidious when the term "Rolex watches" appears on Jeweler 1's website, but the link redirects you to Jeweler 2's page. Jeweler 1 invests the advertising and promotional dollars to bring buyers to his site, then Jeweler 2 steals the customer. Not having to invest in advertising, Jeweler 2 may even undercut Jeweler 1's price. It is downright sinister.

When rumors came out that Microsoft planned to add such a feature to their software, the response was ferocious. Microsoft doesn't carry the friendliest of reputations for the manner in which it competes. Some people believe the company shows few restraints when it comes to finding ways to monopolize their business. Nevertheless, if they ever had any thoughts of adding such a program to their software, they quickly backed down. Microsoft may be the quintessential 800-pound gorilla, but not even they were prepared to deal with the level of ire this idea generated.

So it is perhaps a surprise to see a piece of this concept sneak in the back door through Google, the friendly giant. The concept has not appeared in such a bludgeoning form as people imagined would happen with Microsoft. It has come in unobtrusively, in a relatively insignificant, totally voluntary, and seemingly harmless way with Google. However, it could be the tip of an iceberg. Whether it ever becomes more than what it is now, a small tip which will have little impact on your business, or someday reveals itself to be the hidden iceberg that can sink your business, is impossible to tell. However, it is something worth being aware of in its infancy, because no one can tell for sure how much this infant might grow.