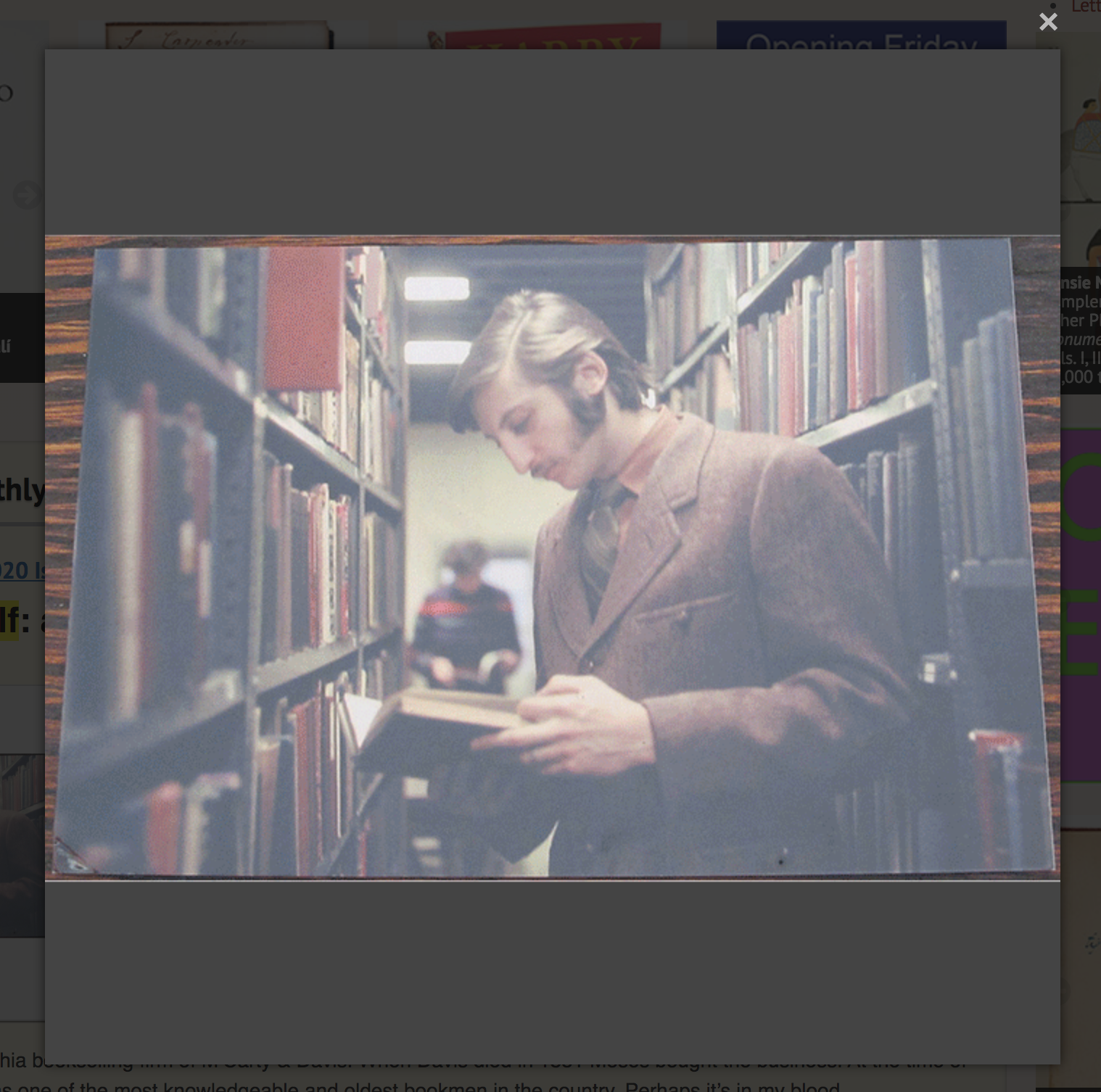 This recollection was written recently.  The author has been a book dealer in Philly so long 17 year locusts have thrice come by.

A couple of months ago an old friend of mine sent me an article that had appeared in the June, 2020 issue of The American Stamp Collector & Dealer. My friend Gus Spector, a retired physician, is an avid book collector. His book collection’s primary focus is Philadelphia, with an emphasis on ephemera. The collection includes a number of albums that contain pictorial envelopes that depict buildings and neighborhoods long since gone. Because most of these envelopes have stamps and postal marks they attract people whose interests are mainly philatelic, however they are also prized by bibliophiles and ephemerists .

The article, “A Moment in Postal History”, by Kevin Lowther, is the story of a cache of letters written by Thomas Story Kirkbride that were sold at an auction in 2019, that turned out to have been stolen. Thomas Story Kirkbride (1809-1883) is considered to be one of the pioneers in psychiatry, during what has been termed “the renaissance in psychiatry”. Dr. Kirkbride received his medical degree from the University of Pennsylvania in 1832. After that he was a resident at the Friends Asylum for the Insane, and later in private practice for several years. In 1840 he was elected physician in chief and superintendent of the Pennsylvania Hospital for the Insane, a position he held until his death 43 years later. The letters Mr. Lowther purchased were stolen from Pennsylvania Hospital. After reading this article I was taken back in time to an incident that occurred nearly fifty years ago.

Our old book shop was located at 1317 Irving Street in center city Philadelphia. It sat behind the Library Company of Philadelphia and the Historical Society of Pennsylvania on a small street that ran for only one block. Despite our proximity to those distinguished institutions, there were a fair number of less than desirable bars and clubs that surrounded our place of business. Today what was once Philadelphia’s tenderloin district is now a much more respectable neighborhood. Most people had no idea that Irving Street existed, and giving directions was always a bit challenging. Most of our business was done via catalog, or direct quote. Because of our obscure location we had very few walk in customers. People from out of town usually had trouble finding us, and many of our customers who knew where we were chose not to visit because of our less than genteel location.

In 1971 I was a young bookseller, and had just taken over the MacManus Company from my parents. One day in early October of that year two men in their mid to late twenties entered the shop and proceeded to offer me books and documents. I don’t remember too much about the books, although I seem to recall that one of them was a Franklin imprint. I do however have a vivid recollection of the manuscript material .There were numerous letters written by Thomas Story Kirkbride and others by Benjamin Rush. In addition to letters they had Kirkbride’s manuscript doctoral thesis, “An Essay on Neuralgia”. There were other letters, but they were less important.

Even though I was a young tyro with only slightly more than three years of bookselling under my belt, I knew that this material was really good. I also knew that it didn’t belong to the two men who brought it to me. One of them, the” talker” we’ll call him, couldn’t construct a simple grammatically correct sentence. The other one displayed a certain economy of language, and would only weigh in with periodic grunts. The more I looked at this material, the more its importance hit me. These documents had great historical as well as monetary value. At one point I was speaking with the “talker”, and I said something like “this stuff is really hot”, meaning of course that it was good. He turned chalk white, because his interpretation of “hot” was in the vernacular.

I now found myself in a very uncomfortable position. I knew that if I confronted them they would leave and that would be the last anyone would see of these documents. I cajoled them into thinking that I would “fence” the material and sell it for them. We agreed that I would need some time to price and research these pieces before I could sell them. They left everything with me and a date was set for the following week for us all to get together.

I now was faced with the task of figuring out where they had been stolen from. In retrospect it should have been easier than it was, but I was green and it took longer than expected. I contacted the Historical Society, The American Philosophical Society, and finally Pennsylvania Hospital. Once it was established that these materials were stolen from Pennsylvania Hospital, their security people put me in touch with the Philadelphia police. Two plain clothes detectives came to my shop and interviewed me about all that had transpired. I told them when I had agreed to meet with the two men, and it was arranged that the detectives would get to the shop an hour in advance of their arrival.

I remember the events of that day with great clarity. Ten minutes or so before the thieves were supposed to arrive, H. Tatnall Brown, a customer, and former dean of Haverford College came in. He was an older gentleman (actually I am now older) who was a bit hard of hearing. Not without great difficulty I managed to get him to go to the rear of the shop, explaining as best I could that an arrest was about to take place. Just at that moment the front door opened and the two men entered. My desk was in the front of the shop, about twenty feet from the front door, and there were two chairs that sat directly in front of it. The two sat down and I proceeded to engage them in conversation. When at some point they had incriminated themselves sufficiently the two officers, who had been hiding half way up the stairs, but within earshot, ran down and arrested them at GUNPOINT! I had not bargained for that, and it took me a while to regain my composure. The detectives handcuffed the two and off they went.

The bad guys were arrested.  I did my civic duty by making sure that these documents were returned to their rightful owners. What could possibly go wrong? Well, as it turned out, plenty.

The two thieves were taken to the police station on Eighth Street, and were being held until their arraignment. Once there, it was discovered that one of the men, the “talker” was a security guard at Pennsylvania Hospital.  A bit later one of the arresting officers happened to notice that one of the pair was trying to hide a piece of paper. The policeman took the paper, which turned out to be a phone bill in the thief’s name, but that listed an address that was not the one he had given as his lawful residence. A warrant was obtained and the police searched the building in question.

Imagine my surprise when I was informed that the building in question was a house that was being used as an indoor marijuana farm. These morons were taking their ill-gotten gains from selling stolen manuscripts and putting them into what was then a somewhat hi –tech hydroponic weed factory. This was beginning to look like a modern day Horatio Alger story that had gone off the rails.

There were however a couple of unforeseeable problems. Pennsylvania Hospital sent me letters praising me and my actions. These praises, as it turned out were being sung faintly. The hospital was quite embarrassed because they no idea that anything had been stolen, and worse, nothing had ever been properly cataloged, and therefore they had no idea what items were missing. This of course made them look negligent, but despite that, they had to go through the motions of recognizing my heroic actions.

The other problem was that Coins and Currency, a local auction house had been buying items from these two and selling them on consignment as well. This was unfortunate for more than one reason. The person who ran the auction was a woman I had known since I was a small boy. Her brother had been extremely kind to me in my youth, so I was very sorry that she was involved. The result of her implication in all this was that she never spoke to me again.

Since the criminals’ nefarious activities included drugs I was now convinced that I had unwittingly stumbled into some sort of organized crime syndicate. A date was set for their court case which was a month or so after their arrest. It would be a gross understatement to say that I was nervous. I was petrified. I kept all my doors locked, and constantly looked over my shoulder. I had a starter pistol which I thought about carrying, but decided that it probably wasn’t necessary. I would have run fast enough without it.

Finally we had our day in court. The trial took place in City Hall. There were several cases being heard before ours. By the time our case was finally called I was really nervous, and I had no idea what to expect. The judge was a very large and somewhat disinterested person. I remember that he had great difficulty in understanding the importance of these stolen papers. I think if these men had taken a car, or television sets he would have gotten it. They were being defended by a public defender, and I was just there by myself. When I testified, their lawyer tried to make it look as if I had led these poor lambs astray, and really put me on the spot.

The judge sentenced them to three years in jail, and immediately suspended the sentence. My nervousness had reached new heights and I was a basket case. I couldn’t understand how this could happen. And more importantly I didn’t know what to do. I was convinced that my shelf life was fast approaching its expiration date.

Fortunately nothing ever came of all this despite all my concerns. What did happen was that I was awarded a Citizen Commendation by the Philadelphia Police Department. It has the gold seal of the city police department and is signed by the police commissioner.

The other thing that came of all this was a headline in one of Philadelphia’s newspapers. In those days Philadelphia had three daily papers: The Inquirer, the Bulletin, and the Daily News. My mother who was a bit of a snob always disparaged the Daily News, Philadelphia’s daily tabloid. Both the Inquirer and the Bulletin made scant reference to the thefts and what followed. The Daily News on the other hand had a headline that read: “Old Books Yield Leaves of Grass”. Apologies to my mother, but I couldn’t have written a better headline.