For those who collect on faith: How values change 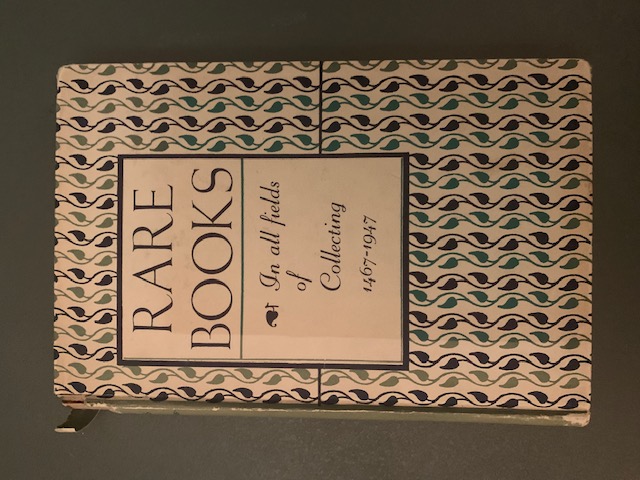 A catalogue at the divide between what was to what would be: a gem

Those who collect, collect on faith.  We accept we’re paying up and hope time confirms our enthusiasms and heal our overpayments.  So be it.  It’s such a pleasing field.  I recently re-read Scribner’s 1947 Catalogue No. 135:  Rare Books in all fields of collecting.  We have many Scribner catalogues in Transactions+ because they have long been appreciated as gems of focus, selection and concision but this was a new one to me.  And then I thought I’d like to see how their offers have held up in the 73 years since they committed their thinking to print. And it was interesting.

These days acquirers look interchangeably between dealers and auctions.  In 1947 the rare book field was retail, and auctions, by and large, wholesale.  Scribner was very retail, residing at 597 Fifth Avenue in New York City.

The timing was exquisite, the War over and the economy beginning to rev.  The auctions once powerful had thinned and would recover as the next generation of dealers would become specialists.  The ABAA was an idea coming into fruition in 1949.  Scribner’s catalogue 135 was issued on the edge of time, aware both of what had been, looking ahead to what would be.  In that spirit I reread their 465 lot opus and I’m sharing how 18 random items have fared.

Take care.  It’s a wild ride.  Copernicus’ 1543 [Yes they had one!] will go much higher than our estimates suggest because we follow trends over the past 120 years and Copernicus was less appreciated, even to the point, hard to sell in the first half of the 20th century, while other items would deeply underperform today.  Every dog gets it’s day.

Taken together at full retail in 1947 the price was $12,375.  Today selecting comparable [this is subjective!] copies from Transactions+ we find their current estimated value to be $736,488 and their average probability of reappearance to be 14.2 years.

To this we add information from Transactions+:

Taken together, build your collection for the fun of it while being mindful that markets, copies and opinions change.

To which I add, it’s great fun.