What Is happening At Abebooks? 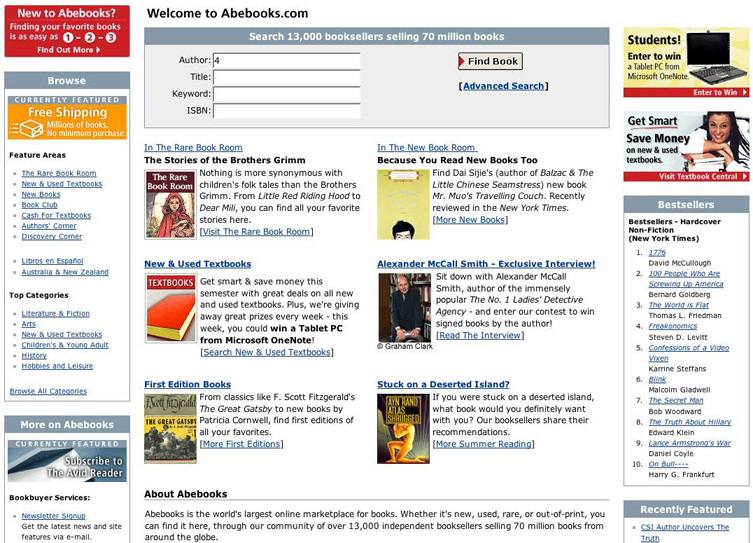 Abebooks offers more old books for sale than any other website.

Consternation, confusion, controversy and downright anger are swirling around the largest old and used bookselling site in the world today, Abebooks.com. All of the major bookselling sites have strained relations with their sellers at one time or another, but Abe has been pilloried by the trade of late in ways not seen before. The explanation is that the venerable bookselling site has undergone some major changes recently. Changes almost inevitably lead to disgruntled users. Some don't like any change; others have legitimate beefs. On top of this, the implementation of these changes has evidently not gone smoothly, and this has led to further upset in the bookseller community. Sales have apparently been lost, and work multiplied. This is not a prescription for happy customers.

The sense of chaos and insufficient concern for the interests of their sellers has made Abe a target for much bookseller wrath. What Abe may see as "enhancements" can come across as mere attempts to grab more money to harried booksellers. However, I think this may be the side issue for Abe. Changes do not always go smoothly, and while implementation may have been a bit rough at Abe, technical glitches are usually worked out. A few acutely upset sellers may carry out their threats to walk, but as long as Abe is able to correct the technical problems in a reasonable amount of time, the great majority will stick around. Just like Abe, booksellers are out to maximize their profits, and whatever consternation and anger they feel, ultimately they will stay with Abe so long as the relationship, though it may be strained, is profitable.

However, beyond the upset of these surface tensions there are some underlying fundamental changes taking place, and I believe this is the really important issue between Abe and the booksellers, particularly those who specialize in antiquarian and rare books. While I don't believe this is intentional, these changes are having the effect of turning the knowledgeable, experienced bookseller into just another listing amateur. However, it is precisely this knowledge that enables the professional bookseller to successfully conduct his business. Turn a master chef into just another hamburger flipper, and he becomes nothing but another minimum wage employee. Turn an experienced, knowledgeable bookseller into just another lister, and he becomes just that, another amateur book lister. He's of no more consequence than a high school kid selling some books he found at a yard sale. But first, a little background to understand why these fundamental changes, which I believe are really unintended consequences of the new way Abe seeks to conduct its business, are occurring.

In the beginning, and for many years thereafter, Abe charged its booksellers only a listing fee. The listing fees were quite reasonable, enabling dealers to participate even if their sales weren't that high. It was a very successful formula for gaining listings, and it enabled Abe to zoom to the top of the list of bookselling sites.