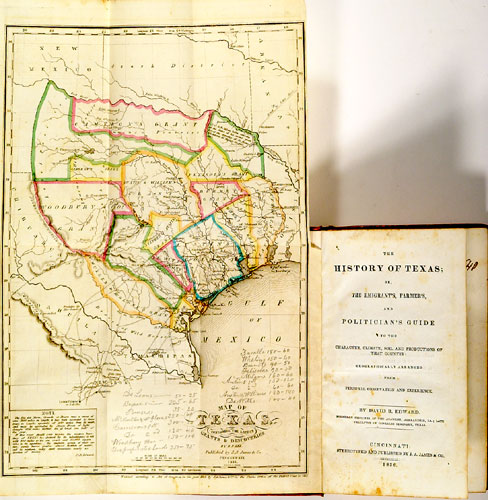 The volume consists of some text and numerous engraved plates with text and was apparently issued several times; as a result almost no two copies are identical. The plates are found in different states and issues, but the books themselves are usually deemed to be complete if they merely contain a reasonable number, usually about 70, of the plates. The book is undoubtedly the most important iconographic representation of John Law’s Mississippi Bubble Scheme and of the financial ruin it caused thousands of individuals and of the embarrassment it occasioned for various European governments. Its satire on the whole affair has never been surpassed. It even includes a set of playing cards to drive home the nature of the gamble involved in the venture. Ironically, to this day nobody knows who produced this work. The copy here certainly appears to be reasonably complete with text and 71 plates; however, it failed to sell for its estimated EUR 4,000 ($4100).

With the approach of the Lewis & Clark Centennial, interest in the various reports of the expedition of the Corps of Discovery remains constant. (See Julie Carleton’s review article on “ Lewis & Clark and the Revealing of America,” AE Monthly, September, 2002). This interest reveals some ironies, however. In the PBA #254 and Sotheby’s auctions were a total of five various editions of the reports. Ironically, in the PBA auction, the official first edition of 1814 (lot 158) failed to sell for its estimate of $15,000-$25,000. Apparently all thought that too high a price to pay for a copy missing the folded map and with Library of Congress stamps on the title pages. With the map present, this same edition fetched $69,320 on an estimate of $50,000-$70,000 at Sotheby’s (lot 208). In the PBA sale, a better fate befell the complete New York, 1893, annotated edition (lot 159) of the 1814 text, however, which sold for $1265.00. Even better in the same sale was the fate of the New York, 1904, edition of the original journals and other manuscript material (lot 160), which was a special copy in a publisher’s presentation binding. It went for $8050.00, an amount that would have bought the slightly defective original 1814 edition offered as lot 158. A minor Lewis and Clark background item also brought a nice price in the same PBA sale. One of the books that Lewis and Clark consulted before their departure was Jonathan Carver’s Travels. Carver’s text was first published in 1778 and is the controversial record of the farthest penetration by a European into the American Midwest up until that time. A rough copy of the Walpole, 1813, edition of this text was knocked down for $316.00, well above its realistic $150-$250 estimate. That was a high price for an edition that has been denounced as the ugliest edition of Carver ever printed.

Three unusual Western Americana items were also found among the various sales. The first, Cowan’s lot 314, was a very fine copy in a contemporary binding with original paper spine label of David B. Edward’s The History of Texas; or the Emigrant’s, Farmer’s, and Politician’s Guide…(Cincinnati, 1836). The map was in excellent condition with no splitting at the folds. Written by an eye-witness to many of the events he describes, Edward’s insights and observations have become crucial to understanding Texas history just prior to its independence. In a perverse way Edward is almost as important a Texas observer as Mary Austin Holley, whom he plagiarized. The book is so anti-Texan that it offended practically everybody, and Edward decided for his own good to leave the republic soon after the Texas Revolution. This copy sold for $4,312.50 on an estimate of $2000-$3000.