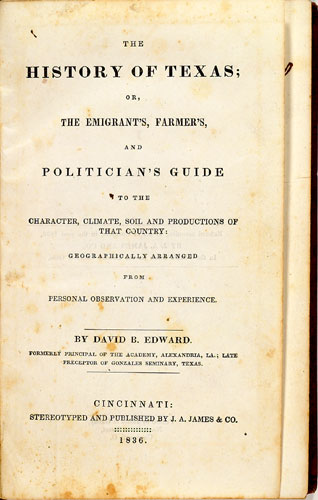 The History of TexasCowan’s Lot 314

Americana Exchange in the course of a year reviews about 300 auctions from over twenty auction houses in both America and Europe. The results of those reviews are mounted on the AE web site in various forms, such as subject analysis and price results that are linked to full descriptions of the lots as they are found in the houses’ on-line catalogues. Those reviews are ongoing projects that are constantly updated.

The review here is of a somewhat different sort. Here we will review various lots and offerings in some recent auctions to ascertain trends, bargains, howlers, and any other sort of auction analysis that may be interesting, sobering, or perhaps amusing. This review will appear on the 1st of each month but will concern only printed materials (primarily books), although AE enters any type of printed or manuscript Americana in its auction database. Each review will go over auctions in the recent past. Not every auction will necessarily be included each time. This review is not intended to replace such auction house reviews as the Swann Trumpet, where auctions are reviewed in some detail.

Although a good deal of various types of Americana were auctioned during the period, the area of Western Americana was fairly well represented. Despite its modern definition, Western Americana is an enduring field that has long been of interest to collectors and libraries as the concept of “the West” advanced from the eastern Atlantic shores to the Appalachian Mountains to the Mississippi River to the Pacific Ocean. The field was represented by individual items and by several runs of material. Some interesting contrasts emerged across the various auction lots.

A well-known work concerning the “West” as it was understood in eighteenth-century Europe was somewhat buried in the Hauswedell & Nolte sale as lot 295, “Karikaturen.” This lot consisted of a copy of the famous Het Groote Tafereel der Dwaasheid (Amsterdam, 1720). The bibliography of this book is almost entirely unsettled.