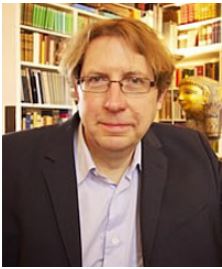 An Oxford University professor has been arrested in connection with the theft of some ancient Egyptian biblical fragments. The mostly papyrus fragments belonged to the Egyptian Exploration Society but were housed in the Sackler Library at Oxford. Arrested was classics professor Dr. Dirk Obbink, an expert on ancient biblical writings and fragments, who apparently also had a business in selling such material (presumably, at least for the most part, legitimately).

The fragments ended up in the possession of the Museum of the Bible in Washington, D.C. They made their way there after being purchased by Hobby Lobby, the large chain of American craft stores. Both Hobby Lobby and the Museum of the Bible are owned by the Green family of Oklahoma, devout evangelical Christians. This is not the first time the parties' zeal for building an important biblical museum has led to some unfortunate purchases. In 2010, the same year as several of the alleged purchases from Dr. Obbink were said to have been arranged, representatives of Hobby Lobby and/or the Greens purchased an enormous number of cuneiform tablets and other artifacts which had been illegally taken out of Iraq. There were numerous red flags in that transaction that should have made it suspicious to someone representing the buyer. It is not clear whether there were warning signs in this transaction or if the sales by an Oxford professor lifted the transaction above suspicion. In the Iraq case, Hobby Lobby and the Greens returned all of the items to Iraq and paid a $4.6 million fine.

Representatives of Hobby Lobby have reportedly said the fragments were sold to them by Dr. Obbink and have supplied some documentation. Those parties and the Museum of the Bible have not contested the Egyptian Exploration Society's claim of ownership. They have already returned all of the items to the EES.

Suspicions have evidently been ongoing for several years. In 2016, the EES failed to reappoint Dr. Obbink in charge of their collection of papyri found in Oxyrhynchus in Egypt because of “concerns which he did not allay.” The EES discovered that not only were several items missing, but that the cataloguing records for them had also disappeared. Access that would have allowed someone to remove such records would have been limited to a small number of people. The fact that they were missing these items was only determined because they kept a back-up copy of the catalogue entries.

Last year, Dr. Obbink was denied any further access to the collection. This came after the EES was shown a 2013 contract for sale of some of their fragments allegedly from Obbink. The contract was supplied to them by representatives of the bible museum. In a published statement, the EES said, “The MOTB [Museum of the Bible] has informed the EES that 11 of these pieces came into its care after being sold to Hobby Lobby Stores by Professor Obbink, most of them in two batches in 2010.”

Last October, Prof. Obbink was suspended from his duties at Oxford as a result of the EES investigation. At that time, he vehemently denied all of the charges in a letter sent to the Waco (Texas) Tribune. If this seems an odd place for an Oxford professor to respond, he served as a visiting professor at Baylor University in Waco at various times between 2010-2018. Baylor is associated with the Baptist Church and is noted for a deep religious orientation. During part of this time, Baylor was the site of the Green Scholars Initiative, sponsored by the Green family, with which representatives of the Greens, if not family members themselves, were present and involved with the University. Obbink, who is a Nebraska native, may have been offered a permanent position at the University at this time.

In his statement to the Waco newspaper, Prof. Obbink said, “The allegations made against me that I have stolen, removed or sold items owned by the Egyptian Exploration Society collection at the University of Oxford are entirely false. I would never betray the trust of my colleagues and the values which I have sought to protect and uphold throughout my academic career in the way that has been alleged.

"I am aware that there are documents being used against me which I believe have been fabricated in a malicious attempt to harm my reputation and career. I am working with my legal team in this regard.” The “documents” he mentioned would evidently include the one from 2013 in the possession of the Museum of the Bible indicating he sold several items to them. Earlier, Obbink said he had received some payments for consulting from the museum, but never for the sale of ancient bible fragments.