Assault and Robbery: $50,000 Worth of Comic Books Stolen Physically from Dealer 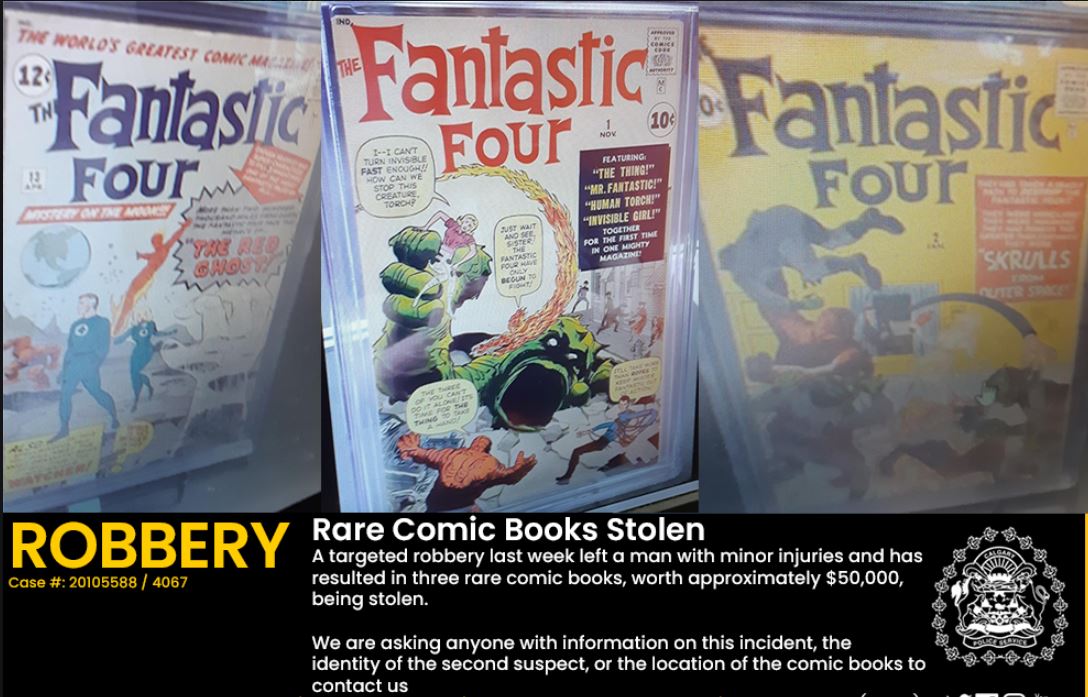 There isn't much nice to be said about book theft, but at least for the most part it is a genteel crime. Most often, someone will sneak some books out of a library or bookshop in a briefcase or under a coat. More sophisticated crimes may involve cutting pages from a book, switching cheap books with valuable ones, tapping an insider in a rare book library to remove them. Sometimes, there are simple cases of breaking and entering a shop or a storage locker at night. Currently under prosecution is a case where thieves entered a warehouse at night by descending from the roof on ropes so as not to set off the alarms. They had been tipped off to a planned shipment of rare books from a London warehouse to a book fair in New York. However, with the recent rapid increase in the value of comic books, and their following at times by a younger and sometimes less sophisticated audience, thefts have not always been as well thought-out or genteel. Such a case occurred in Calgary, Alberta, last month, and employed a certain amount of physical violence. There were no significant injuries, but it is an ugly turn.

According to the Calgary Police Service, the crime occurred on the evening of March 11, as the owner of Alpha Comics, Kevin Robicheau, was locking up. Robicheau made a habit of taking his three most valuable comics, with an estimated value of approximately $50,000 in total, home with him at night, fearing they might be stolen in a break-in. The comic books were in a briefcase. As he was locking up, two men grabbed him from behind and wrestled for his briefcase. Evidently, they knew Robicheau's procedure of taking his most valuable comics at home each night in a briefcase. During the ensuing struggle, they tore the briefcase from his hand and threw him to the ground. Fortunately, according to the police report, he sustained only “minor injuries.”

The suspects then ran toward a vehicle, but Robicheau got to his feet and pursued them. When they saw him, the two suspects changed course and fled on foot. It is not clear whether they thought he would catch them, or feared if they realized this was their car, he would take down the license plate number and report it to police. If this was the case, it was too late, as the store owner realized this was their car. Robicheau took down the license plate number and called the police.

The police quickly traced the owner of the car from the license plate number, 20-year-old Rifahie Al-Rifahie. Al-Rifahie made the arrest even easier for the police when he later returned to the car, hoping to drive it away. As of the time of the arrest, the second suspect had not been identified, nor the comic books recovered. The three stolen comic books were identified as issues #1, 2, and 13 of the Fantastic Four, with grades of 6.5, 5.5, and 4.5 respectively.