Collecting has its Moments 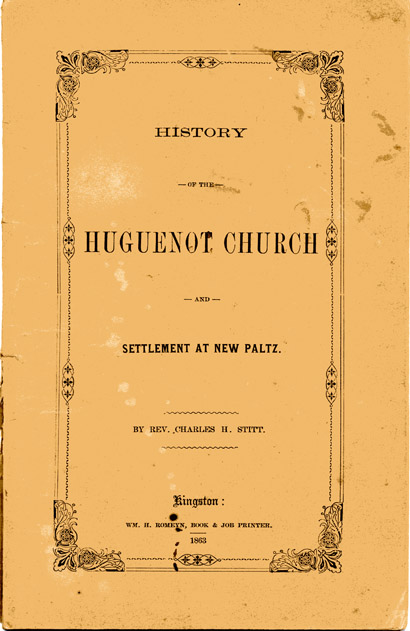 For the past three years we have been building AE. The experience has been tough and fascinating. We thought we were simply going to capture information about books and put it in a database. In fact, we ended up developing a process that encompasses both finding the books in the marketplace, and running them through a filter of data that enables the buyer to make intelligent decisions. The AED (Americana Exchange Database), our original project, provides the data needed to make those decisions. It contains almost 1.2 million records, most including prices. The later project, MatchMaker, enables the buyer to find even obscure books and ephemera from the mass of offerings now available. Here are a few of my own recent purchases on eBay and ABE that further confirm the value of the AED as a database and MatchMaker, our suite of collector premium services, as a process.

On eBay two unique Ulster County [New York] items were offered by a merchant who usually sells lingerie and swimwear. In this case it was the descriptions that were scanty. These pieces are among the rarest Hudson Valley printed materials in existence but were offered with barely a line of description. One is the "History of the Huguenot Church and Settlement at New Paltz" by Rev. Charles H. Stitt, a 29-page pamphlet printed in Kingston, New York in 1863. The other is "Collections of The Ulster Historical Society, Volume I - Part 2" with a Kingston indicia and dated 1860.

The Stitt history is rare to the point of invisibility. The Lefevre History of New Paltz, first issued in 1903 and revised and enlarged in a second edition in 1909, mentions Rev. Stitt's tenure as Dominie of the Dutch Reformed Church but makes no mention of this history in its index. Neither of the historical societies in New Paltz and Kingston have copies or even awareness of it. Neither was it in the AED nor mentioned in the indexes of local and county histories. The item basically didn't exist until MatchMaker found it.

Both items came up as ten day auctions, closing 15 minutes apart, and I saw them both on day one. Until the final day nothing much happened. An occasional eBay bidder placed initial low bids, meeting the seller's minimum bids to open [$8.00], essentially agreeing to buy each item if no one else stepped in. With a few hours to go on day 10 I tested my ability to bid. I placed a small bid on the Stitt's over the then current bid, and soon saw the other bidder go to $20. With a minute to go, I placed a bid for $175 and bought the item for $32.99.

Fifteen minutes later the second item, Part 2 of Volume I of the Collections of the Ulster Historical Society was completing its 10 day run. This volume was described as 177 pages and in fact was not. The pagination begins on 77 and runs to 177 but the seller apparently only looked at the last page number. I suppose this gives me the right to return or to complain but I'm nevertheless satisfied. I knew the print run of the vol. II to be 50 but found no mention in the AED and specifically in Munselliana [Munsell was the printer] for the print run of the first volume. A few minutes later this second piece was sold to me for $42.99 against a bid I placed in the final minute for $200.