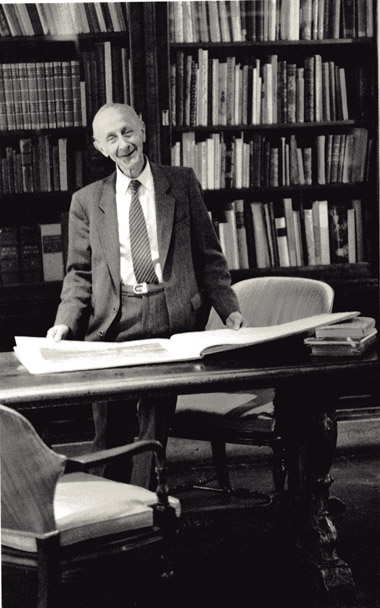 
"He inquired about a French newspaper and I sent it to him, discreetly including my address on a tiny clipping," the essential piece of ephemera that would forever link their lives for he wrote to thank her and initiated a conversation of letters. Later, the relationship growing serious, a friend suggested Lucien might not be entirely reliable and Marguerite sent his handwriting to be analyzed by a graphologist who confirmed what her heart already knew, he was a kind and utterly reliable man. They married in 1946.

He was already established in New York, having left Germany in the early 1930s after two years experience with Max Perl to work five years in Paris at Librairie Incidences. In 1937, with war approaching, he traveled by ship via Cairo and the Suez Canal across the Far East to Hong Kong, Yokohama and eventually San Francisco. Arriving in America with his intelligence, seven books entrusted to him by Pierre Beres, a white suit, a fine hat and five dollars he made his way to New York to become a book dealer. He took a small place on 53rd Street, and nine years later Marguerite joined him there, he to sell books in post world war New York and she to assist in the endeavor. Later they moved to the second floor of the Partridge Building - into a beautiful paneled space and then uptown to around 79th St. as prosperity took hold. The firm, initially called Pierre Beres, later became Lucien Goldschmidt, Inc. Marguerite's part in the business became cataloguing, bookkeeping and a bit of everything, he the selection of material, cataloguing, creating their always changing window displays and making sales. In time they found success and raised a family. Their two children, now in their early 50s and married, live in the metropolitan area today.

We spoke about the book business as it was. It was a business of books and images where the emphasis was on knowledge and the buyers were those who appreciated the material for its condition, history and importance. The Goldschmidt view of pricing was to set it fairly. The goal was relationships more than sales. With relationships came the prospect of future sales. Mrs. Goldschmidt remembers her husband with admiration as a man who understood both his books and his clients very well.

From the outset catalogues were issued. There were many but one stands out for Marguerite, "The Good Citizen, a collection of books written to further or to undertake the improvement of mankind" issued in 1981. This is a catalogue of books that have been read and understood by the seller and are presented as a complex amalgam of periods, languages and subjects that together deliver the promise of the title. In the world of bookselling today, where descriptions are routinely cribbed from the internet, a compilation of diverse material drawn together in support of a concept that none of the titles individually envision, is the highest expression of what the bookseller can be: interpreter and guide to those who collect. In their career they produced 63 catalogues.