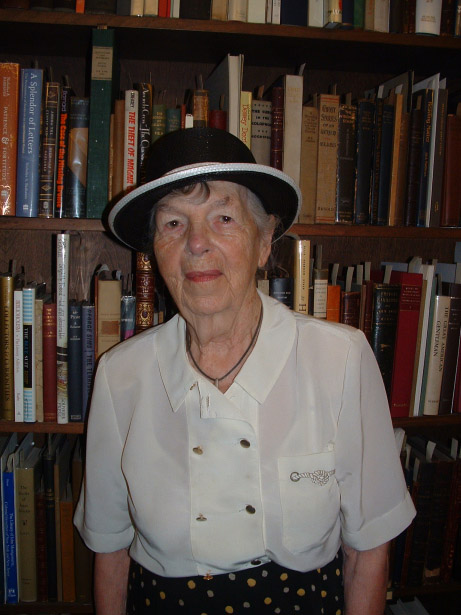 I met Marguerite at the Grolier Club in New York. I was there for a week doing research on long forgotten auctions while she, a Grolier member, was cataloguing material for the club. We were separated by only a few feet but a wall of books lay in between and for most of the week only the occasional street sound penetrated the third floor library. The place is quiet.

Fernando Pena, the Grolier librarian, chanced to introduce us after a few days and I learned she is the widow and partner of Lucien Goldschmidt who for fifty years was a bookseller first in Europe and then in the United States. I asked if, when I returned to New York, it would be possible to interview her and in a bright, clear voice she said "Why, of course." Mrs. Goldschmidt is 92, a very young 92.

Today I'm back and, with my wife Jenny, visiting Marguerite in the New York apartment on the upper west side that she and her husband purchased more than forty years ago.

Marguerite is quick to say she was active with her husband Lucien in their business but she always referred to him. She describes him as a remarkable man among remarkable men in the Goldschmidt line. He was knowledgeable in the European way, very clear and often correct according to Marguerite who explained this with a lovely smile. "In a life and in a marriage someone must be first and someone second. In our business and in my married life Lucien was first." He was one of three sons. Raymond Goldsmith, the economist was his brother. Another brother, Felix Ben-Yosef, lived on a kibbutz in Israel and was friends with Ted Kollek, mayor of Jerusalem and an avid book collector. Their father, Alfred, was a lawyer. She describes her husband as the kindest, most human of the brothers.

Marguerite was born in England to Swiss parents and has lived a complicated life, been educated in England and Switzerland, speaks English, French and German and reads Latin. Her father, Paul Studer, at 47 died of tuberculosis in 1927, was naturalized British in 1915 and from 1914 until his death, was the professor of Romance languages at Oxford University. He spoke nine languages, taught and translated Anglo-Norman documents. During the First World War, he served in the Intelligence Department of the Admiralty, in London. Beginning in 1932 Marguerite studied librarianship at the University of Geneva, apprenticed at Bristol University and Geneva University libraries and then worked as "praktikant" or intern at the University of Tubingen Library. After she received her diploma in Geneva she was appointed assistant cataloguer at the University of Bristol library. Later she was "associate" of the British Library. In 1944 she became librarian of the Bush House Library at the BBC in London and while there met Lucien on a double date for lunch at Lloyd's Corner. She remembers that he added money to the tip, a generous act that conveyed a sense of European manners and courtliness that even 59 years later still brings a smile. "He was a gentleman and I knew it then."