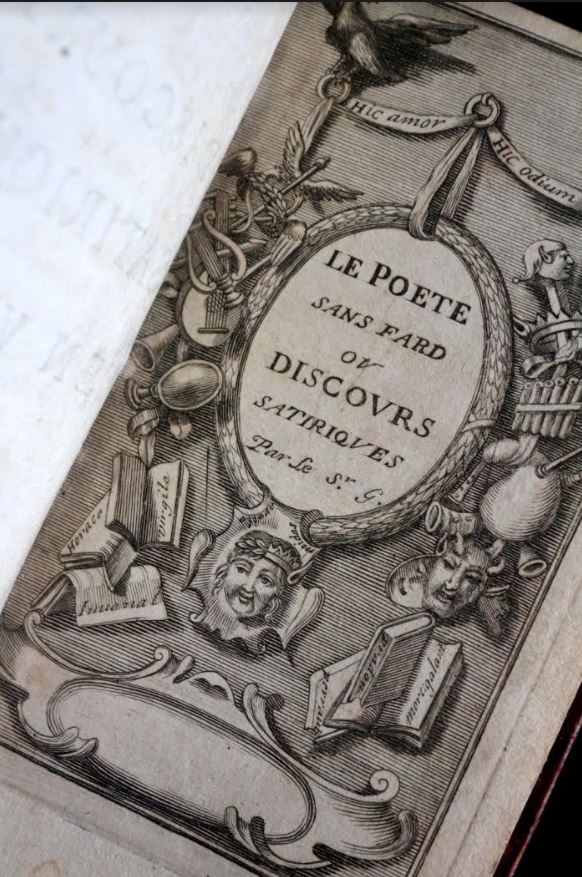 Long before the days of Instagram, make-up was already seen as a way to hide the truth. A French poet once wrote: “Today, Lize is quite cute / But where shall she find such a beautiful face tomorrow?—Oh, my birdbrain! / She has more than a thousand at the end of her brush.” Fortunately, satire was here to expose the “true nature” of man—and woman. After Perse, Juvenal or Boileau, another author picked up the burden of this ungrateful task in the late 17th century. His name? François Gacon (1667-1725). His book? Le Poète sans fard, or The Poet With No Make-up—#satire.

I recently got a hold of a first edition of Gacon’s satires (Cologne, 1696)*, that came out anonymously. It features a nice engraved allegorical frontispiece. Our copy also features the stamped ex libris of Edouard-Thomas Simon (1740-1818) on the title page, “ET Simon D.T”. He was a surgeon from Troyes, who came to Paris in 1786. He played a political role during the Revolution (1789), and had a plan for an official library adopted in 1795. He later retired to Besançon. Curiously, the notice glued on the endpaper of our copy doesn’t mention him—it is yet a very learnt notice, probably written by a bookseller. Just like satirists take off our masks, the author of the notice reveals a forgery: our book wasn’t actually printed in Cologne but in Lyon (France), by Antoine Boudet. He got the manuscript “from the author, whom he met in Paris in 1695.” Two printers from Lyon, namely Baritel and Moulin (their names do not appear on the book), pirated it in 1701, “adding names and keys.” In August 1697, Gacon sent a new manuscript to one Dumesnil, in Rouen—it came out as supposedly printed in Cologne by Corneille Egmont. “This third edition was seized at Gacon’s home on February 20, 1698, by Nicolas de la Mare, police Commissioner from Le Châtelet, and Begon, Lieutenant of the Militia,” our notice resumes, giving no source. “The author was then residing ‘in the second room of a house in Saint Martin street, at The Wooden Sword.’” There’s another edition from 1698, printed at “Libreville—Freetown, At Paul-speaks-the-truth, At the-Mirror-that-lies-not.” Gacon was a zealous satirist and his fiery rhymes set many writers on fire! Among his victims were La Motte, Bossuet, and Rousseau. Well, the guy drew a satirical portrait of his own mother.

Gacon was talented—his verses are clean, straightforward and he hits right where it hurts. He wrote a satire against the official gazette of the time, which he calls “their stupid Mercure.” He accuses the authors of corruption: “When an insipid book is sent to them / It is praised if a banknote comes along with it.” It would be a relief, he states, should the names of the contributors like “Devizé, Corneille and their likes" appear “in the obituaries instead”. No wonder his book was eventually seized. In his satire against false devotees, he describes a particular woman: “This one might seems less turbulent / But ends up being even more evil / She covers her dark venom under her humble countenance / Woe! Unto those who offend her / Soon, they shall feel the pain of her revenge / Nothing more dangerous than an upset devotee / A furious tiger would show more humanity.” A footnote reads: “The author here talks about his mother.” Nevertheless, our bold satirist wasn’t daring enough to criticize Louis XIV. This was a very dangerous game to play, and several authors and printers lost theirs lives at it. The “flattering verses of the sycophants,” Gacon writes, “have always irritated your ears, Great King.”—#letsbereasonable.

Their victims have often described satirists as embittered and slandering creatures. Their works indeed flatter the base instincts of the readers, “who”, Gacon admits, “rather than reading them to correct their vices, use them to satisfy their secret taste for slander.” What is fascinating with satires is that they remain forever accurate—from Horace to Gacon, do not ask for whom the bell of satire tolls, it tolls for you. Over the centuries, Man has worn various types of make-up, but under the thick layer of social conventions and hypocritical smiles, the naked grimace of his true self has remained unchanged—#ManwillbeMan.