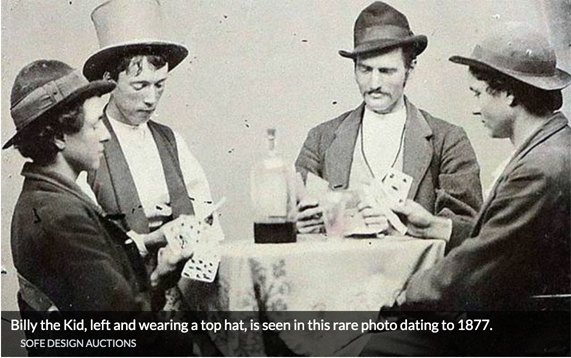 You could call him Billy but, Bonny, NO!

Billy the Kid was a bad guy who achieved immortality killing people back when killing people one at a time still made the news.  These days it takes 5 to make the papers on a busy day or occasionally only 3 on Saturdays.  As a society we’re in the flush.  How much will be remembered 100 years from now about today’s murder calculus is anyone’s guess but we do have recent evidence that, although Billy is long dead, he lives on in popular memory and continues to be news-worthy as evidenced by a recently identified image thought to be Mr. Bonney that passed through the rooms of Sofe Design Auctions of Richardson, Texas recently with a $500,000 start but failed to sell.  In 2011 what was thought to be the only image of Mr. Bonney brought $2.3 million.  That a second, and different, image in 2019 would bring about the same amount was speculated but that it didn’t suggests four possibilities; that his following is stalling, his stature declining, his proponents disappearing, or the image insufficiently authenticated.

Adding insult to injury, as we reported in 2011, those interested in Billy are divided into two groups, the curious and the macabre.  His bones are buried along Route US Highway 60/84 three miles from Fort Sumner, New Mexico inside a rusted heavy metal screened enclosure to forestall collectors from digging him up for a bone or tooth.  Such collectors of course will someday want to share their pickings with the next generation of would-be-parents who may in time send a piece of his bones or fingernails overseas to be cloned as an embryo that will let us learn if his criminal history was the outcome of genetics or circumstances.  So stay tuned.  Billy will be back.

Here are some links

A Times of London article