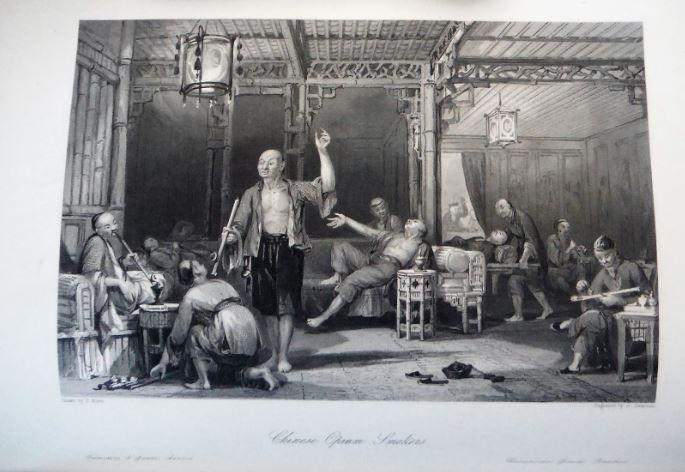 Chinese Opium Smokers, a plate by Thomas Allom from the 1858 edition of the Chinese Empire Illustrated, published by the London Printing & Publishing Co.

Described as,”Arguably one of the most appealing pictorial books published during the mid-1800s, The Chinese Empire Illustrated, (known also as China, its scenery, architecture, social habits &c. illustrated), truly is a remarkable book. With 75 steel engravings, after the original sketches by Thomas Allom, and descriptive letterpress by Irish clergyman G.N. Wright, the book has a focus particularly rare for its time – on the life and daily activities of the Chinese people rather than the country’s picturesque scenery.” This assessment published in the Rare Books Blog of the University of Adelaide in Australia goes on to say, “Until the early 19th century the western world really only had vague notions of Chinese culture. Allom, through his exquisitely detailed drawings, was able to introduce the West to a view of China as comprehensive as possible in the mid-1800s.”

Though you may never have heard of English artist and architect Thomas Allom (1804-1872) or ever seen a complete copy of his work on China published in three different book form editions during the mid-19th century, chances are good if you’ve been handling antique books and prints for any length of time you’ve come across individual plates from this series and wondered what they were and where they came from.

Curiously enough, though Allom is widely believed to be one of the great chroniclers of Chinese life there is some doubt that he ever actually visited the country. The website Chinese Outpost in its history section writes, “Although Allom traveled widely throughout his career, many of his Chinese illustrations were based on the works of earlier artists - Lieutenant Frederick White, R.M., Captain Stoddart, R.N. and R. Varnham, for example - rather than on his firsthand views of China. In fact, there is considerable doubt as to whether Allom ever visited the Middle Kingdom at all. Many sources refer secondhand to his having been there, but we know of no convincing firsthand evidence to prove it. Therefore, it is possible that all of Allom's illustrations of China were based on, or ‘informed by,’ works of other artists.”

Whether or not he actually drew these images from life, the views by Allom and others were published in three editions. The first in 1842 by Fisher & Son; followed by an 1845 edition by Peter Jackson. In 1858 the London Printing & Publishing Co. edition was supplemented by additional plates by other artists.

“All three editions were made from the same engraving plates. The plates were sold from Fisher & Son to Peter Jackson to London Printing & Publishing Company,” according to the auction site Artelino.

Perhaps the scarcest incarnation of the Chinese Empire Illustrated is the serialized version issued by The London Printing & Publishing Co. in booklet format. These individual issues measure about 11.25 x 8.75" with tan thin paper wraps featuring the ornate typography of the period on the front and ads for other London Printing publications on the back. Each booklet in the series is string bound and contains eight different steel engravings with tissue guards (most by Allom, but also some by other artists). Bound into the back are multiple pages of uncut text. The bound-in text has little or no relation to the images.

All the editions illustrate an incredible variety of Chinese life and scenery including people, military scenes, architecture, sea views, festivals, landscapes, kite flying, cock fighting, puppet shows and much more, all rendered in minute detail. Although the engravings were issued bound and uncolored, they have often been taken out of the volumes and skillfully hand colored, which seems to add substantially to their curb appeal and boost their prices.

When it comes to value of individual plates the jury is out. The actual selling prices seem to be all over the board. Though beautiful, there seems to be relatively little demand for the multi volume set, while the individual plates are offered at prices that range from below $20 to several hundred dollars apiece depending subject matter, condition, and whether framed or unframed, or hand colored or uncolored as issued.

To see the range and diversity of Allom’s work on Chinese people and places flip through the digital images in the six volume Fisher & Son edition in the collection of the New York Public Library. Click on the arrows at the lower edge of the frame to move forward and backward through the pictures.