Devil in the White City by Erik Larson 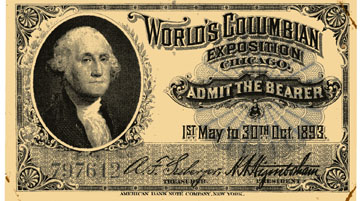 
The Columbian Exposition represented the success of a city and a region but it was not easily accomplished. The author, Erik Larson, gives the primary credit to Daniel H. Burnham, a local architect, who forges an alliance of nationally renowned architects to design the important fair buildings and create what would become the "White City," a campus of buildings that shared common architectural elements and were all finished in a shade of white. The single color unified the architectural images and gave the fair its unofficial name: the White City. That the fair comes to life so vividly in the pages of "The Devil in the White City" is a testament to Mr. Larson's research and writing skills. But it is the intertwining of a murder's increasing obsession and the extraordinary steps he takes to create a mechanism of easy and relentless death that, when juxtoposed with the progress of the fair itself, project a sense of black and white piano keys separately conveying their parts and together creating music, a dirge interspersed with high notes.

For the non-fiction reader who likes plot and pace this is one of those unusual books where truth delivers more mystery than most fictional works usually do. This book is also an interesting point of departure for collectors to find relating material. Dr. Herman W. Mudgett [H. H. Holmes] comes up in three eBay searches today while H. H. Holmes is implicated in 40. The "World's Columbian Exposition" comes up 607 times on eBay. On ABE using Herman Mudgett in the keyword field finds 59 matches, 137 with H. H. Holmes in quotes, and 846 for World's Columbian Exposition in quotes. "World's Columbian Exposition" comes up almost as often on eBay as ABE probably because the type of fair material that continues to circulate is mostly ephemera. Much of it is tickets and brochures which seem to be plentiful and generally inexpensive and not so easily sold on ABE. A collection, of such material, in any event, is not going to be costly.

So how many people did he kill and what finally happened to Dr. Mudgett, aka H. H. Holmes? Holmes confessed to committing 27 murders. Mr. Larson confirms 9. Murder, always heinous, is sometimes random, often spur of the moment and committed only once. Holmes slowly, and with great premeditation, constructed a mechanism of death and then used it again and again to kill mainly women who sometimes loved but often at least cared about him. He built a death chamber to coincide with the opening of the fair and was discovered only by chance after it closed. To learn how the story turns out you'll need to read the book, which I recommend.

The Devil in the White City, by Erik Larson, was first published in 2003 and is available in hardcover and paperback on-line and in book stores around the world. In paperback it is an entertaining 396 page read.