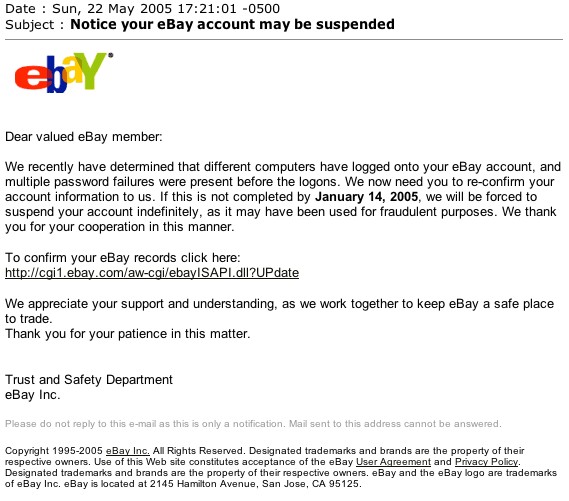 This fake email from eBay is

Phishing has recently become the most popular of internet frauds. "Phishing" is an attempt to get vital information from you over the web, usually through an email solicitation. This information could be your bank account data, credit card number, or social security number. It has become so prevalent that one might think there is no need to reiterate a warning here. Still, the number of these I get everyday tells me they must still be working. What's more, as people catch on to one scam, variations are created to catch those who put their guard down. The price of identity protection, like the price of freedom, is eternal vigilance.

It all started with the infamous Nigerian scam. You know that one. The former Nigerian state official looks for your help in removing the $25 million he embezzled from the government from his country. Just send him your bank account details and he will wire the money to your account. In return for the help, he will let you keep 20% - a cool $5 million. Of course, the real reason he wants your bank account information is to draw money out of it, not send money to it.

Eventually, this scam broadened out. It was no longer just ousted government officials, but widows, bankers, and investors who wanted your help. They were no longer limited to Nigerians either. Appeals came from numerous other third world countries as well. The scheme, however, remained basically the same. A desperate person, writing in stilted English, but with great solicitousness and good manners one would never expect from a Westerner, seeks your help. Though you would think that everyone would be wise to this scam by now, I still never go more than a couple of days without one.

There is a Nigerian offshoot that targets booksellers in particular. It is the email request from the Nigerian looking to set up a bookstore, which comes with a large order for books and a credit card that has undoubtedly been stolen. Don't fill his order.

The Nigerian scam evolved to today's most popular version, confirming your account details. It started with eBay. You would receive a message from eBay, or at least it looked like it was coming from eBay. They would say that there had been some suspicious activity in your account, so in order to keep it open, you had to go to their site and confirm your data. A link would take you to a place that looked like it was part of eBay, where you could confirm such things as your credit card number. Of course this was not really eBay, though perhaps these operators might use your credit card number to buy something on eBay. For themselves, of course, not you.